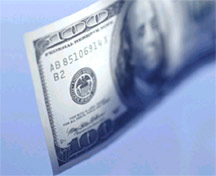 Credit unions are owned by their members. Often credit unions are able to offer better deals than banks due their not-for-profit nature. However, some credit unions are only open to people who work for certain companies or live in certain areas. This rule has been relaxed over the years as credit unions find it necessary to have a larger customer base. Many credit unions still offer free checking accounts with no monthly fees. Credit unions deposit accounts are insured up to $250,000 by the NCUA (National Credit Union Administration). This type of insurance is just like the FDIC insurance at banks. Credit Unions can also be insured by private companies. (American Share insures accounts up to $500.000 for example.)

Banks are usually owned by shareholders. Accounts at banks are insured by the FDIC up to $250,000. In 1966 there were five different banks in Santa Cruz County. Currently,  Bank of the West, and Union Bank are owned by foreign companies (France and Japan respectively). The largest US bank with a branch in Santa Cruz County is Chase.

Money orders can be bought at banks, Post Offices, convenience stores, and most drug stores. Those listed here include it as part of cash handling services.  Check cashing and payroll advances can become costly. Your bank would have the best value for cash handling. Being listed here should not be considered a recommendation.

Investment services usually have checking accounts available through a partner bank. (e,g. J. P. Morgan with Chase and Charles Schwab with Bank of America).  Some investment services require a minimum amount to have brokerage service. Your bank can offer many of the same investment opportunities as the investment companies. The major exception is frequent dealing in stocks.