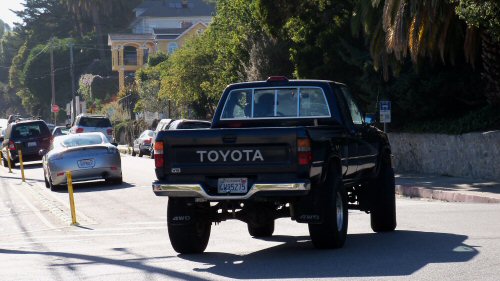 Driving westward on High street usually is low on traffic, but going eastward can be another story entirely. During rush hour, even if High street is the shortest route distance-wise, it is most likely not the fastest. Traffic can be backed up and stopped, leaving you stuck there for 20 minutes or more. Better bets are taking Bay to Mission Street or King Street.

Though the ride westward is uphill, cycling conditions on this street are pretty good. The road was repaved recently, so the ride is almost pothole-free. Plus, it's exhilarating to whiz past all those people stuck in cars on the way back down. 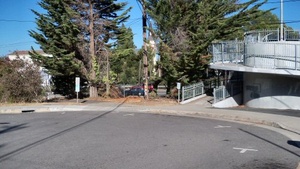 Up the ramp crosses over Highway 1 to the Mission. Left is a bike/foot trail to Evergreen Street near Harvey West Park.

Though there are no businesses on High street (with the exception of those just off High street on Cardiff), the street houses many churches and schools. Some of the churches rent out parking spaces during the weekdays to students. 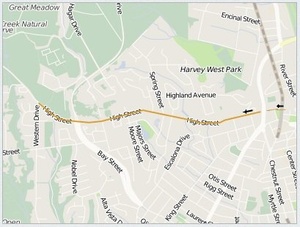 High Street has one way sections.