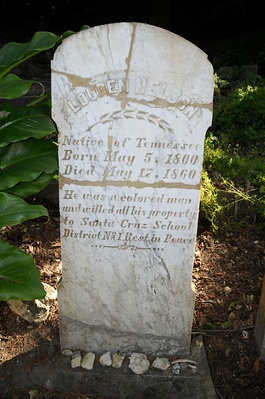 His Grave Marker at Evergreen Cemetery reads: 'He was a colored man and willed all his property to Santa Cruz School District No. 1. Rest in peace.'

London Nelson, known perhaps more commonly as Louden Nelson, was a black former slave who arrived in the Santa Cruz area in 1842 or 1856, according to separate research done by local historians Phil Reader and Donald Clark.1 The Louden Nelson Community Center is named in his honor. Nelson was born on May 5, 1800 "in a North Carolina slave cabin on a cotton plantation which was owned by the Nelson family."2 In 1850, he came west with his master's son and another slave, Marlborough Nelson, as a cook and servant. The three men worked a gold claim along the American River for four years, at the end of which Nelson and Marlborough gained their freedom. London came to Santa Cruz and after renting land to farm as well as working as a cobbler, he had enough money by 1860 to buy land next to the San Lorenzo River near River Street and Front Street, which he occupied briefly until his death in the same year. In an oral will he gave his estate to the Santa Cruz City Schools District "for the use and benefit of said School District forever, for the purpose of promoting the interest of education ... "3 This donation paid for the reopening of the school, which had been allowed to close due to lack of financial support, and--according to Clark--the establishment of the first permanent school house in Santa Cruz on Mission Hill.  London's first name was erroneously changed to "Louden" in documents after the  1930s, but almost no documents before that time show his name as anything other than "London."4 London Nelson was buried in Evergreen Cemetery where his headstone can be visited; the specific location of his grave is uncertain.5 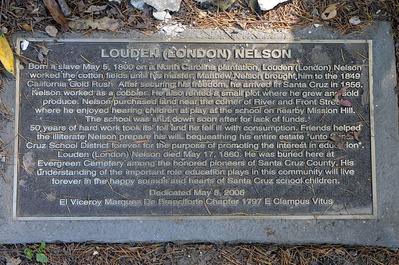 The plaque in front of his grave marker at Evergreen Cemetery, dedicated May 5, 2006.