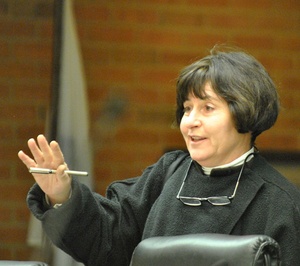 Jane Lumm. (Photo courtesy of the Ann Arbor Chronicle)Jane Lumm (b. 1957) has served unaffiliated with any political party on the Ann Arbor City Council representing Ward 2 since November 2011. She ran for re-election in November 2015 and defeated Democrat Sally Hart Petersen for a third consecutive two-year term.

Lumm was re-elected as an independent in November 2013, beating Democratic Party nominee Kirk Westphal and independent Conrad Brown (a member of the Mixed Use Party).

After her service on the Ann Arbor City Council from 1993 to 1998 Lumm ran for mayor in the 2004 election, losing to incumbent Democrat John Hieftje. In those races she appeared on the ballot as a Republican.

In 1998 she ran unsuccessfully in the Republican primary for the Michigan House of Representatives in 52nd District seat.

She is married to John Lumm, former Chief Financial Officer and Treasurer to the Eastern Michigan University Board of Regents. He retired in 2014. They live near the Huron Hills Golf Course on Ann Arbor's east side.