4th Street runs from the PG&E yard on L Street through downtown but stops for Central Park (long ago it used to go through). There's a little section between B and A Streets before ending at the campus. 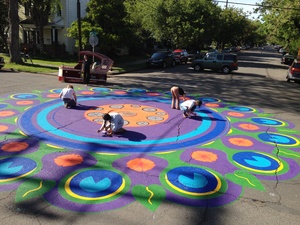 Community members got together on April 6, 2014, to paint a mural at the intersection of 4th and K Streets.

Some people refuse to believe that 4th Street actually exists. This may be due to the poor intersection of 4th and E, which is a two way stop for those on 4th. However, we'd like to assure you that this is positively 4th Street.