Christianity is a monotheistic religion based upon the life and teachings of Jesus of Nazareth, a Jewish mystic who taught in the first century CE. Most Christians believe that Jesus was sent to Earth by God his Father to save sinful humanity. Christians usually believe that Jesus was God in human form, that his mother was a virgin at the time of his birth, and that he was the Messiah foretold by Jewish prophesy, sent to free the Jews. Christmas is the biggest holiday. Symbols associated with Christianity include the cross, crucifix, ichthys ("Jesus fish"), and dove.

Christianity has had many disputes over the specifics of beliefs resulting in many variations, often called denominations. Broadly speaking, Christianity can be divided into Catholicism, Orthodoxy, and Protestantism, although that's a very simplistic overview. Some denominations are loosely bound by a set of common beliefs (Baptist congregations), some are so similar that they often worship together (Chaldean Catholics and Roman Catholics). Some even have a tradition of constantly splitting into new groups due to minor disagreements as matter of practicing their faith (Amish). Most practitioners believe that all who follow Jesus are Christians, while other, more finicky types are more specific and consider certain denominations (or, in extreme cases, all denominations other than their own) to be non-Christian. Most major denominations are represented in Davis, see Churches for a (hopefully) complete list. 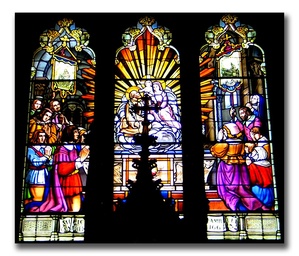 Catholic is a term that means "universal." In the early days of Christianity, Jesus' followers (called apostles) traveled all over the world spreading Jesus' teachings and founded many local churches, each lead by a bishop. The term "catholic," then, referred to the greater church formed of the collection these smaller churches. While these churches were largely independent, the bishops would meet up as needed to settle issues of faith, such as beliefs about who Jesus was and how Christians should live. Since Jesus designated Peter, the first Bishop of Rome (now known as "the Pope"), as his successor, the Bishop of Rome became increasingly powerful. The churches now known as Eastern Orthodox split away from what is now the Roman Catholic church over the the extent of the Pope's authority over other churches (among other things). Though the split was bitter, Eastern Orthodox and Roman Catholics probably have more in common with each other than any of the other branches of Christianity.

Catholicism or Orthodoxy is a term used to describe a group of churches (denominations) that believe they are the universal Christian Church which is descended from the Apostles of Jesus Christ to this day. Though there are many churches that fall under this umbrella, the major groups include the Roman Catholic Church, the Eastern Orthodox Churches and the Anglican Communion. These churches all share several distinguishing features that make them catholic. All have an organized hierarchy of clergy (Deaconate, Presbyterate, and Episcopate), affirm the belief in seven sacraments, believe in a group of venerated Christian persons called saints, believe in the Holy Trinity (Father, Son, and Holy Spirit), hold apostolic succession as key to their validity and continue to observe many traditions of the early Christian Church. The Roman Catholic Church believes their Bishop of Rome (Pope of Rome) to be the head of the universal church and the Vicar of Christ. They maintain they are the same church as the one created by the Apostles and have until recently been uninterested in efforts to understand other churches (ecumenism). The Orthodox Churches stem from the same church as the Roman Church but split over political and theological issues during the 11th century and maintain the Roman Church left them. Anglican Churches trace their roots to the Church of England which was born out of the Reformation. They believe the Roman Catholic Church deviated from the “True Church” and purged themselves of unbiblical practices created during the middle ages and returned to the liturgical style of the pre-medieval Catholic Church.

Mosaic artwork is often associated with Orthodoxy. There are many Catholics that reside within Davis and who attend the university. They are most recognizable on Ash Wednesday when they receive ashes upon their forehead as a remembrance of their physical mortality. Other distinguishing features include the making sign of the cross before prayer and or the ownership of a personal crucifix. While no Orthodox churches exist within Davis City limits, there are several parishes located in Sacramento. Roman Catholics have Saint James' Catholic Church and for students, the National Newman program is run out of the Newman Center which also conducts mass. Anglicans have Saint Martin’s Episcopal Church just behind the University Mall. There exist several student groups that cater to the different traditions including: The Orthodox Christian Fellowship, Newman Catholic Center, and the now defunct Canterbury Club for Anglicans. The Anglican group merged with the Lutheran Fellowship a few years back, and now together cooperatively run a joint ministry.

A statue of Martin Luther. Protestantism is a term used to describe any church that formed in protest of The Roman Catholic Church, but has also been applied to groups (perhaps incorrectly) that derive many beliefs or practices from traditional protestant denominations. Traditional Protestant churches include the Presbyterian, Methodist, Lutheran, Anabaptist, Reform and Baptist Churches. Anglicans are technically protestant, however; unlike other Protestant Churches they have kept a lot of Catholic doctrine and tradition. The main distinguishing feature of all Protestant groups is their belief in five fundamental points of truth or Solas (Dogmas). They are: 1) The belief that Christ alone is mediator between God and Man, 2) Authority rests upon scripture alone and not tradition of the Church, 3) Faith alone and not good works will save a person’s soul, 4) Grace is solely a gift from God and a person cannot influence their own grace 5) Glory and praise are to God alone, thus rebuking the belief in Saints. Lutheran Churches are derived from the Church started by the reformer Martin Luther, a German monk disaffected with the Catholic Church. Reformed Churches derive their teachings from John Calvin who defied the Catholic Church and championed the notion of pre-destination. Presbyterian Churches derive their teachings from Calvin but uphold the belief (as do Lutherans) of a presbyter (priest) hierarchy. Methodists came about after the death of John Wesley, an Anglican priest who inspired many churches to adopt a more protestant style of life and who felt Anglicans and Catholics concentrated too much on tradition. Baptists, while never officially protesting the Roman Catholic Church, are usually considered a Protestant group as they came about during the time of the Methodist Church and hold beliefs similar to other Protestants.

Like Catholics, there are several places of worship for members of the various Protestant denominations. There are three Baptist Churches, three Lutheran Churches, The United Methodist Church of Davis and the Davis Community Church, which is Presbyterian. There are three distinctly Protestant student organizations that meet on and off campus. Cal Aggie Christian Association which is a cooperative program between the Methodist, Presbyterian and Churches of Christ. The Lutherans are in a joint venture with the Episcopal Church in the Lutheran-Episcopal Christian Fellowship. 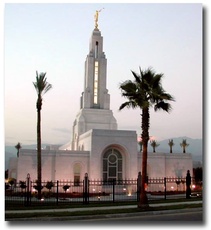 A Mormon Temple with the Angel Moroni atop it. Often referred to as the “protest against Protestants”, Restorationism is a movement that occurred in the 19th and 20th centuries around the time of the Second Great Awakening that attempted to transcend the denominations of Protestantism and restore Christianity to its perceived ideals. Though the churches in this classification may have little in common in regards to theology (in fact their beliefs are quite at odds with each other), they all arose out of the perceived notion that Christianity had been lost since the early years of Rome and their Churches were restoring the “True Church”.

The Church of Jesus Christ of Latter-Day Saints was started by Joseph Smith, who claimed that Christ had appeared to him and told him that all currently existing churches were apostate and he was the chosen one to restore Christianity to it’s original form.

The Seventh-Day Adventists were started by a group of Christians who believed they had received apocryphal confirmation from God and concentrated on preparing for the events proclaimed in the Book of Revelation.

The Church of the Nazarene believes that Jesus’ teachings did not replace the Torah of Jewish tradition but exemplified it.

Jehovah’s Witnesses hold that shortly after the last Apostle perished, the Church became apostate and that only through the close, unbiased reading of the Bible can we understand God’s message. They even produced the New World Translation of the Bible because they felt existing translations were insufficient for the task. Jehovah Witnesses also believe in neutrality in politics, abstinence from military service and a rejection of Trinitarian Christianity.

The Religious Society of Friends known as Quakers can be considered a restorationist group as well, although they are a product of the Anabaptist movement, which was a radical manifestation of the Reformation in the 16th and 17th centuries. Quakers believe in “feeling” God and reject a hierarchal church structure. They are a pacifist church.

Note: Protestant, Catholic, and Orthodox Christians have labeled these groups as heretics.

In Davis, sometimes residents and students can find Jehovah’s Witnesses walking house to house evangelizing, and Mormons (members of the Church of Latter-Day Saints) doing similar work. The Church of Jesus Christ of Latter-Day Saints can be found on Elmwood Drive. They also run an institute of religion close to campus. The Seventh Day Adventists utilize the Pole Line Road Baptist Church on Saturdays for their worship services. The Davis Friend’s Meeting house can be found on L Street. 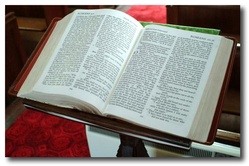 Sola scriptura: The basis of Non-Denominational Churches. Simply stated, these Christian groups lack any regional or national organized structure. The terms “Evangelical” (which is not to be confused with Evangelist), “Fundamental”, “Charismatic” and, “Pentecostal” all refer to groups within this Non-Denominational classification. Non-Denominational Churches are derived from Protestant Churches and many individual churches vary in their styles of worship according to their influences. As a result, people have often grouped these churches within the realm of Protestantism, but this is misnomer. These Churches have a wide amount of autonomy and while individual churches may collectively affiliate with one another, they don’t exert the same control established denominations have on their congregations. Thus they are different from Protestant groups that have a national structure and a tradition of sorts. Pentecostal Churches are the largest movement within this tent of Christianity, focusing on the gifts of the Holy Spirit: prophesying, speaking in tongues, exorcisms, and healing. Non-Denominational Churches are the fastest growing group of Christians in the United States. Proposed theories have been a general disaffection with the authority of hierarchy, a return to the fundamentals and general conservatism which is in direct contrast to the liberalizing of many Protestant Denominations.

There are many Non-Denominational Christians in Davis, perhaps more then the other groups put together. Some examples of these churches include The Davis Christian Assembly, Davis Korean Church, Calvary Chapel Davis, and Discovery Christian Church.