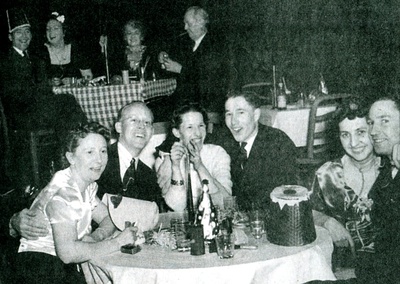 Partying on New Year's Eve, 1940. In front at left are Ora and Harley Webb. At back, center with cigar, is photographer William Kollecker, and to his right, Charlotte Dewey. If you can identify any of the others in this photograph, please use the comment box, below. Adirondack Daily Enterprise, December 29, 2012 Born: March 29, 1906

Harley Webb worked in the maintenance department at the Ray Brook State Hospital for 39 years. With Mary Webb he held a Tent Platform Permit (see #54) of state camp #1369, Cross Bay to South Side, on Lower Saranac Lake. They lived at 183 Broadway. Harley played with the Ray Brook Ramblers baseball club in 1948, and later on the Saranac Lake Chiefs.

In 1930 he married Ora Pelky in Champlain.

He had been a resident of Saranac Lake since 1930 and, until his retirement in 1972. He was an avid bowler.

Survivors include his wife; three brothers: Harvey of Champlain, Ross of Plattsburgh, Ashal of Upper Saranac Lake; a sister, Doris Kaufman of Champlain; two grandsons; one granddaughter, five great-grandsons, and many nieces and nephews.

Funeral arrangements are in care of the Fortune-Keough Funeral Home in Saranac Lake. There will be no calling hours. A private funeral service will take place at the convenience of the family, with the Rev. Robert Lowenthal of the First United Methodist Church of Saranac Lake officiating. Interment will be in ["St Bernard's Cemetery.

Memorial donations may be made to the Saranac Lake Volunteer Fire Department or the American Diabetes Association Northeastern Chapter in care of the funeral home.

2 Bobsledders Are Hurt In 2 Separate Accidents

Webb dislocated a hip and chipped the hipbone when he was thrown from his two-man sled yesterday morning on the Little S. curve. His brakeman, Gordon Rascoe, also of Saranac Lake was tossed 50 feet into the air but was uninjured. They were making a qualifying run for the interclub races to be held today and to-1 morrow.

The second accident occurred in the afternoon when Helmer had trouble going into the Zigzag section of the run. The sled tipped over but he and Brakeman Jack Ryan of Plattsburgh slid on through. Ryan was not hurt but Helmer's face was badly burned by the ice and a check up at the hospital revealed he also had a fractured collarbone.

The mile run was opened officially for the first time yesterday. It is expected that Helmer will be released from the hospital today.

Three members of his original war canoe team sought out an audience with the owner and aired their grievances which centered largely around the fact that Chuck had jettisoned his entire war canoe team of 1965-66 67 and 68 for a more youthful crew.

The "Castaways" insurgents are secretly pleased that the new young team not only were dead last in the event but came in under water besides in a most inglorious manner.

Johnny Garwood, Tommy Lewis and Harley Webb told Chuck yesterday that they were already under contract to the Belvedere for 1970 and that Bernard Rascoe was building a canoe for them.

Bernard was described as "the poor mans Willard Hanmer" but he is known as an ardent and studious craftsman and if he sets out to build a war canoe he can do it.

The new Belvedere team is already in training for next summer's event and The Belvedere management plans to dress up the team and boat to give the race tone and respectability . , . something that Chuck never could give It, says Harley Webb.

Chuck was roundly criticized two years ago for wearing the Japanese flag as a breach cloth and has consistently been a thorn in the side of regatta officials who never know what to expect.

The new Chucks Lounge team which was scored by the castaways as an incompetent bunch of berserk buffoons is captained by Bruce McNamara an under- water expert. The castaways said that the only way he could bring the canoe to the finish line was underwater . . . because that is his element!

The new Belvedere team will wear Cambridge type rowing suits with the coat of arms of the restaurant over the pocket.

Chuck was usually silent and uncommunicative in rebuttal and said that the press consistently misquotes him.

He recently acquired the nomenclature "Cheap Chuck", for failure to give his championship Softball team new shirts.

It was noted today that he also was splitting his bar towels in two pieces to gain more mileage with the laundry.

Men and women players are invited. The $10 entry fee includes golf, prizes and a buffet dinner.