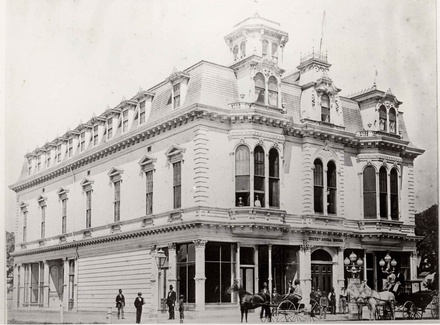 Dietz Opera House (c.1874–1911), Oakland’s first theatre, was located on the northeast corner of Webster Street and 12th Street (aka “Central Avenue” for a few years). The c.1860 edifice had been built as Brayton Hall, once a part of the University of California before that institution moved to Berkeley.

Alfred C. Dietz purchased the property c. 1874–5 from the University. (Theatres of Oakland says the theatre began in 1873, but a September 1874 auction of the property by the U.C. referred to it as Brayton Hall, and a newspaper article says Dietz bought it in 1875 5. In any event, sources agree it was the first theatre in Oakland.)

The opera house was located in the second floor, while the downstairs housed a saloon and a wholesale plumbing supply.

With a seating capacity of 700, the Dietz Opera House featured such performances as “The renowned historical celebrities Buffalo Bill and Captain Jack in the realistic Western drama, written especially for Buffalo Bill, in 5 acts, entitled Life on the Border …” 1 which played for one night only, Wednesday, June 13th, 1877, and well-known stage actors such as Sarah Bernhardt and Adelaide Neilson.

Members of First Methodist Church used the theater for a church (1875-1876) while their new building was constructed at 14th and Clay Streets. 6

In 1884-’85 the Dietz Opera House was listed as having a seating capacity of 900, with a nightly rental fee of $50 (three nights for $125), which included the license. The stage size was 27′×45′ with full stock scenery. For advertising purposes: bill poster: Stilwell Bros.; daily newspapers: Oakland Tribune and Times. Suggested hotels in the area of the opera house were the Galindo (rates $2 to $2.50), Tubbs (rates $2.50), Windsor, Grand Central, Newland, Centennial, Chase, Roberts and Kohler.2

Apparently a change in the city charter around 1889 put the legality of the saloon into question:

An officer yesterday served a notice on A. C. Dietz to shut up his ‘’Opera Saloon” or suffer arrest. Dietz replied: “This city can go to ____. I have a license that does not expire until the 7th of May, and I propose to keep open in spite of Hackett and the Council.” Last evening Mr. Dietz, who is a prominent San Francisco business man, was led a captive to the City Prison. Bail was furnished. Mr. Dietz may test the validity of the new municipal charter. 8

This apparently didn't go well, as a judge found him guilty of selling liquor without a license. Judge Laidlaw concluded that while the action of the Council "may have been harsh and arbitrary, yet it was valid." 10

At some point in the Dietz Opera House’s history, Jack London delivered a lecture on Socialism there. 3 The socialist party had its campaign headquarters there c.1911. 7

The theater, along with the rest of the former UC block, was sold by Dietz in 1903 5. The theater ceased operations in 1905. On May 1, 1911 the wooden Dietz Opera House burned to the ground (perhap an attempt to dislodge the socialists?), and was later demolished. Other buildings in the block were also destroyed or badly damaged in the blaze, including the old Dewey Theatre, and the four-story brick Polytechnic Business College. 4 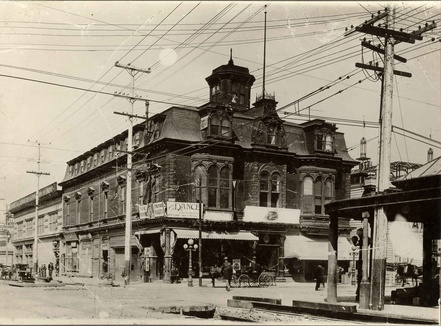 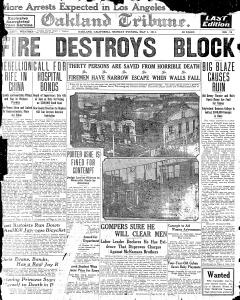 News of the fire 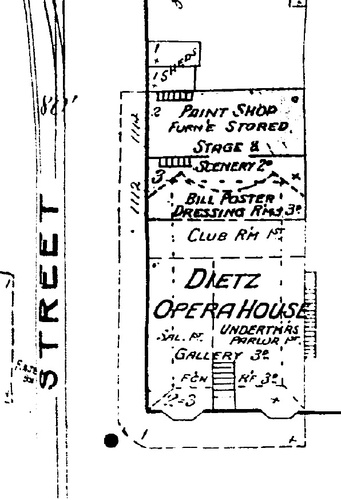 Was it Brayton Hall?

Various sources 7 say the Dietz Opera House (D'OH!) was Brayton Hall on the University of California campus. IIRC there is at least one reference saying it was moved on the lot, too. While there is a resemblance, Dietz was a larger building and had 3 bays on the front. Even allowing for an addition, the basic layout of the building seems wrong.

Discuss :-) Please add evidence for either supposition you find.