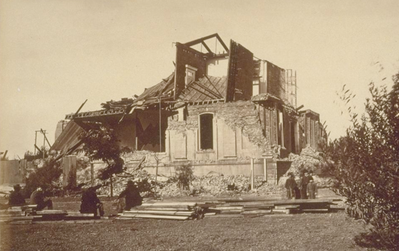 County Courthouse in San Leandro
photo from UC Bancroft Library 4 The last major earthquake on the Hayward fault was the Great Earthquake of 1868. It hit at 7:53am on October 21, 1868, and was estimated to have been between magnitude 6.8 and 7.0. The shaking lasted 42 seconds, and although the East Bay was relatively sparsely populated, it killed 30 people (including 4 in San Francisco) and did an estimated $350,000 (in 1868 dollars) in damage. The ground ruptured along 20 miles of the fault from near Mills College to Warm Springs (Fremont), and moved as much as 6 feet in places. There were numerous aftershocks.

Among the damaged buildings was the county courthouse in San Leandro. The deputy county clerk, Joseph W. Josselyn, died when he was hit by falling debris as he ran from the building. 3 The deputy sheriff was badly injured, and the prisoners in the jail had to be rescued from the rubble. The destruction resulted in the county seat being relocated to Oakland where a new courthouse was built. One colorful survival story was Peter R. Borein, later county recorder, who had been asleep on a cot in the attic. The cot tobogganed own the wreckage out onto the lawn, and Borein received only a small cut on the head. 5

Buildings were damaged as far north as Santa Rosa and as far south as San Jose, and shaking felt as far away as Sonora and Grass Valley. The damage was most severe in Hayward.

In Oakland, part of a wharf collapsed, throwing 50-70 tons of coal into the water. A railroad bridge across the San Antonio slough (now filled land near Laney College) was thrown out of alignment. In Brooklyn and Clinton, the brick kilns of Remillard's Brick Company were damaged as was the Clinton Flour Mill. Perhaps most famously the earthquake destroyed the adobe at Peralta Hacienda. Rather than rebuild, in 1870 the Peraltas built the Italianate Victorian home that still stands at Peralta Hacienda Historical Park.

The History of Alameda County, published by M. M. Wood in 1883, describes the quake and its effects:

In comparison to the desolation sustained in the neighboring towns Oakland did not suffer much damage. The casualties in crockery and glass ware were very great, and many chimneys were laid low. Portions of the wharves were carried away in some instances, while walls were cracked in almost every house, and deep excitement reigned supreme in every household."

Until the 1906 earthquake, it was considered "the great San Francisco Earthquake".