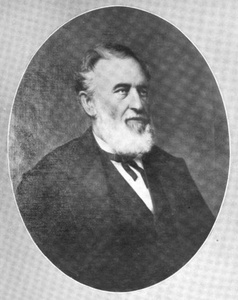 Judge Oscar Lovell Shafter (October 19, 1812 – January 23, 1873) served on the City Council in 1863, and was an associate justice on the California Supreme Court. Shafter Avenue was named for his nephew, William Rufus Shafter.

Born in Athens, Vermont, Shafter was the son of William Shafter, a farmer who was also a member of the Vermont Constitutional Convention of 1836, County Judge and State Legislative member, and Mary Lovell Shafter. Judge Shafter was also the grandson of James Shafter, who fought in the battles of Bunker Hill, Bennington and Saratoga, followed by 25 years in the Vermont Legislature.

The eldest of seven children surviving to adulthood, two daughters and five sons, Shafter's mother died when he was 14 years old.

After attending Wilbraham Academy in Massachusetts, Shafter graduated in 1834 from Wesleyan University in Middletown, Connecticut, and in 1836 graduated from Harvard Law School.

He practiced law in Wilmington, Vermont, and with his political star rapidly on the rise, Shafter was elected to the Vermont State Legislature and although he did not want to run for Congress, was the chosen candidate of the Liberty party, with which he was affiliated.

Oscar Shater married Sarah Riddle in 1840 and together the couple had eleven children, ten daughters and one son.

The prominent law offices of Halleck, Peachy, Billings & Park in San Francisco heard of Shafter's successful New England law practice from his friend Trenor W. Park, a junior member at the firm. They recruited him to join their firm and after accepting their offer, Shafter moved with his family to San Francisco in 1854. Although the firm dissolved shortly after he arrived, Shafter formed a partnership with his friend, starting the law practice of Shafter & Park. Over the years the firm continued to grow and change with the addition and departure of various partners.

In 1863, Shafter served on the Oakland City Council, serving the city where he had built his home. He spoke fondly of Oakland in his letters, and saw it as growing faster than San Francisco and quite fertile. In a letter to his wife Sarah on April 30, 1855, Shafter wrote "I went with a friend to Oakland on the opposite side of the bay. There are thousands of acres of level land there and exceedingly fertile, lying between the bay and the mountains, and it is covered with ancient and gigantic oaks standing from 40 to 60 feet apart, and the sward beneath is covered with a luxuriant growth of grass and flowers. Among these trees the town is built. Every variety of fruit and flower, including many tropical exotics, grow here in the greatest perfection, and as to the climate, it is an unending June. Children here do not die young - at least rarely."

On September 2, 1862, Shafter wrote to his sister Laurette that "I have lived in a hired house ever since I have been here, but on the 1st of November next I shall move into my own, which I am now building in the very pleasant village of Oakland across the bay. There, if nothing evil betide, I shall live the rest of my days."

Shafter became an Associate Justice on the California Supreme Court with a ten year term in January 1864, but had to retire in December 1867 due to ill health.

Shafter had a great fondness for Point Reyes, where he owned a ranch, Punta de los Reyes, and he had plans to build a home in Olema and take up the life of a farmer following his retirement from the legal profession and serving on the bench. A lone Sequoia gigantea was planted on the building site of his planned for home. He acquired large tracts of land in order to preserve its natural beauty and pass the land on to his descendants for their future homes. 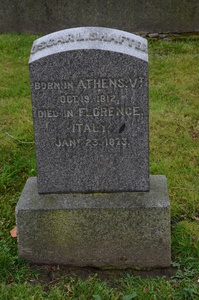 CC SA-BY Our OaklandAfter traveling to Florence, Italy in an effort to regain his health, Shafter died there on January 23, 1873. His funeral was conducted at the home of his son-in-law Charles Webb Howard. As the funeral cortege continued to the First Congregational Church at the corner of 10th and Washington Streets, many leaders of Oakland were in attendance. Judges Wallace, Crockett, Rhoades, Curry, Morrison, Sawyer, Sanderson, and Messrs. Kellogg, Dwinelle, Thornton, John Glascock, Samuel Merritt, Joseph Hoge, Goold and President Durant acted as pallbearers. The services were conducted by Revs. Messrs. McLane and Hamilton. Rev. Mr. Stebbins preached the funeral sermon. Following the service Shafter's remains were deposited into the family vault at Mountain View Cemetery 3

He was the subject of a biography Life, Diary and Letters of Oscar Lovell Shafter written by his daughter Emma Shafter-Howard, edited by Flora Haines Loughead and published in 1915.

There is a memorial window commemorating Shafter in the First Unitarian Church in Oakland of a farmer sowing his fields. On September 4, 1892 Rev. Charles W. Wendte delivered the discourse at the dedication of the stained glass window placed in the church in memory of Shafter by his daughters.

"The Sower"
The Chancel Window
In Memoriam
Oscar Lovell Shafter
Born October 19, 1812 - Died January 23, 1873
By His Children
The kingdom of Heaven
is likened unto a man which soweth
good seed in his field.