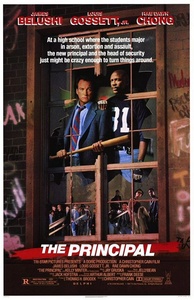 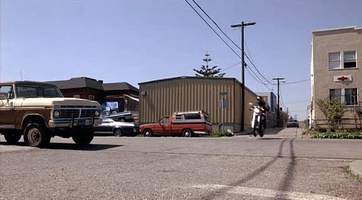 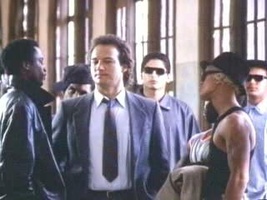 James Belushi and members of the 38th Locos gang (fair use)

The Principal was a movie that came out in 1987 starring James Belushi and Louis Gossett, Jr. Filmed mostly in West and North Oakland at the old Merritt College / University High School at 5714 Martin Luther King Jr. Way.

The movie is about a new principal named Rick Latimer who is sent to run a fictitious school named Brandel. He soon finds that Brandel is run by gangs, drug dealers and thugs. Rick also finds out that a rivalry between a white gang run by White Zak and a black gang run by Victor Duncan has started a gang war on the campus of the school. Rick Latimer, along with Jake Phillips the school security guard, take on the two gangs, resulting in a showdown at the end.

The movie was mostly filmed in Oakland at the old Merritt College Campus. Also scenes were filmed on San Pablo Ave in West Oakland; on Lakeshore Avenue, Lake Merritt is seen. Also in the Webster Tunnel, on Piedmont Avenue near the Chapel of the Chimes, and in East Oakland on Marin Way and Gleason Way near 14th Avenue (International).

Many of the extras where actual members of local gangs and hoods. Many of the Chicano extras were from the 38th Locos gang, 36th Locos and 41st Psycos, all of which were Fruitvale district Chicano gangs.

Other actors in the movie where Rae Dawn Chong, Esai Morales and Jacob Vargas.