I, M and US-signed highways within the boundaries of Downriver since inception past and present.

Prior to Michigan's incorporation into statehood in 1837, the traffic landscape bore no resemblance to what it would look like in the early 1900s, let alone today.  Any roads not "constructed" from area pioneers' footsteps were Indian trails.  The closest major one nearby connected Detroit with Monroe and Toledo (north of Detroit it would join the Saginaw Trail).

In the latter part of the 19th century, the Michigan State Legislature recognized a better system of roads needed to be implemented to draw people to the new state.  The Legislature chartered various private firms to build and operate Plank Roads, better known as Turnpike Roads.  The Plank Road designation was not a term; it was a fact: the earliest roads were constructed with oak planks, before an eventual switch to gravel roadways became the consensus of new construction.

However, while a total of 202 potential Turnpike Roads were actually approved by the Legislature at the turn of the 20th century, only twenty-three were actually constructed.  Bids were won and, seemingly, ignored.

Whether or not the next step occurred due to the recognition of this fact, the Michigan State Trunkline System was inaugurated on May 13, 1913.  Main roads at this time were classified as "divisions," similar to what's used encountered rural back roads in Ontario today, which were termed "division," "sideroad," "line" and "concession."

The first division, Division 1, between Detroit and Toledo.  It would take six years before this and accompanying routes would show up on maps though: 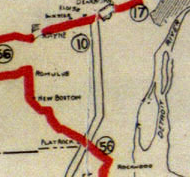 In 1919, Downriver boasted only two Michigan Trunklines, although M-17 already ran close by.

In 1918, the state of Michigan, following the lead of Wisconsin, began to design and mark its own system of interconnected and numbered "state" highways. This first attempt at simplification and systematization proved to be of great value to the motorist. This 1919 map issued by the Department of Highways is one of the first to denote state route numbers as well as road surface type; relatively few roads at the time were paved.

In the beginning: M-10 on Telegraph Road and M-56 on Huron River Drive

In the earliest days of highway designation, the numbers were well different from today's. Division 1 became M-10 (which today designates the Lodge Freeway), which followed Telegraph Road north to Michigan Avenue, following the original M-17 east into downtown Detroit.

The only other original trunkline was M-56, which started at the Ohio border to compete with M-10 before following Old Fort Street into Rockwood, then turned west on Huron River Drive towards Belleville. M-56 would remain unchanged until it was decommissioned by the 1960's.

In 1926, M-10 would be removed from Downriver with the creation of US-24, a western bypass of the burgeoning city of Detroit, which continues to follow Telegraph Road. This was followed by the extension of US Highway 25 north along Dixie Highway and Fort Street into Detroit proper and then out to Port Huron along Gratiot Avenue about a year later, although it at first followed Telegraph to Ecorse Road to Allen Road to Oakwood Boulevard into Detroit, as Dix-Toledo Highway would not open until 1930, allowing the concurrency with US-24 to be cut back to West Road.

Ultimately widened to four and in some areas as many as seven lanes, US-25, which now extended from Port Austin all the way south to Statesboro, Georgia, would barely exist for 25 years until it was to be replaced by a new US-24A freeway, later redesignated Interstate 75. Though US-24 was left unchanged, in 1968, US-25 was rerouted to follow I-75 and Interstate 94 before it was cut back to Cincinnati in 1974 (that same year, it was extended further south into Georgia to the town of Brunswick).

Over the next twenty years, however, portions of what became Interstate 94 that paralleled M-17 were completed. Consequently, M-17 was cut back to end at Southfield Road in 1968 and the following year it was cut back to it's current eastern terminus: Michigan Avenue (which at this point had been redesignated US-12) east of Ypsilanti.

Since it's inception, M-39 has been applied to three different roads in different parts of Michigan. The original applied to a route between Grand Rapids and Lansing, competing with M-16 (which became US 16 in 1926) between the same two cities. However, this was decommissioned by the late 1930s. A short time later though came the Great Single-Digit Trunkline Removal of 1939 (in which all single-digit highway designations were removed in preparation for the construction of what later became the Interstate Highway System) and one of these single-digit routes, M-3 (which today refers to Gratiot Avenue) along Schaefer Highway between US 25/M-17 on Oakwood Boulevard in Melvindale north to Grand River Avenue in Detroit (which, ironically, also was tagged US-16), was redesignated as the second M-39.

Twenty years later in 1959, M-39 was removed from Schaefer Highway and relocated two miles west to Southfield Road between Interstate 94 in Allen Park and 9 Mile Road in Southfield (the future location of the interchange with the Lodge). Back then Southfield as a surface-level road went straight through, divided from I-94 up to 7 Mile Road (much like the current road through Allen Park) and undivided from 7 Mile northward. The freeway wasn't put in until 1966.

Interstate 75: How it came into existence

What became Interstate 75 was first mapped out in 1947 for the future Interstate Highway System, and the resulting plan was published in the 1955 publication General Location Of National System of Interstate Highways Including All Additional Routes at Urban Areas Designated In September 1955 (also known through the shorter and easier-to-remember moniker "The Yellow Book"). Four years before, in 1951, the Michigan Turnpike Authority was formed with the intention to construct a series of toll roads, one of which ran between Rockwood and Bridgeport. However, Charles Ziegler, then the State Highway Commissioner, had a noted distrust of private companies interfering with potential statewide road projects, as he deemed them too important to mess with.  These projects by the MTA were therefore stalled.

The result was apparently a lose-lose scenario: people were getting tired of the constant delays in construction, but no one wanted to revert back to the MTA's toll freeway idea.  Even semi-truckers were willing to support a gas tax increase to raise the funds rather than paying by individual use.  In 1955, Detroit would step in and officially deny the MTA its request to route a highway near Rouge Park on the far west side. Despite MTA's appeals, the Michigan Supreme Court upheld the city's verdict later that year.

Still working on the drafts for the route of the present-day I-75 revealed a route closely following Telegraph Road thru most of its run.  In December of 1955, its proposed routing was finally extended south of Rockwood. The Federal Highway Act of 1956 gave important credence to freeway construction, undermining the MTA's efforts with a promise to build the freeway from border to border (Toledo to Sault Ste. Marie).

The MTA still had one more gasp to change peoples' thinking.  The Turnpike Authority attempted to sell bonds to finance its projects, but received no takers from financiers, who were afraid to compete against the companies building freeways under the FHA of 1956.  Out of the headlines later that year, the MTA was finally abolished by law in 1962.

It was originally proposed that the section of I-75 between Detroit and Toledo be powered by electricity, courtesy of General Motors, in a vein much likened to Henry Ford's attempt to electrify the Detroit, Toledo & Ironton Railroad thirty years before.

Once cleared to build, the construction of I-75 was rather quick: it was built as far north as the Telegraph Road connector (southbound Exit 35) in 1963; by 1966 it reached Southfield Road, and was completed in full by 1969.

The freeway has had four names, of which three are still in use.  During its formative years, it was referred to as the Detroit-Toledo Expressway.  It is most popularly known as the Fisher Freeway, named in a ceremony (September 17, 1970) honoring the brothers who operated Fisher Body.

Though not signed as such, the entire Michigan stretch of I-75 is known as the American Legion Memorial Freeway.  Additionally, it was known as the Michigan Bicentennial Freedom Way from 1976 until the name was retired in 2001.

M-85: Two different designations before ending up on Fort Street

M-85 was also among the original 1919 trunklines, running through Montcalm County passing through the city of Stanton. In 1929, it was extended north to the town of Edmore, but the following year, it was decommissioned in favor of an extension of nearby M-57 over this route.

In 1931, M-85 popped back up on the other side of the mitten, connecting Caro and Mayville in the Thumb. It would only last a decade there and in 1941 it was again decommissioned in favor of improvements to nearby M-24.

It wasn't until 1956 that M-85 would again be used as an official designation, this time along Fort Street between Gibraltar Road and Oakwood Boulevard. In 1967, the northern terminus was cut back to end at the recently-completed Interstate 75, where it remained until 2001 where it was extended back north and then for the first time further along Fort Street into downtown Detroit.

The oldest Interstate Highway in Michigan traces its general route back to the St. Joseph Indian Trail, which traces its beginning prior to Michigan's Statehood in 1837. With the formation of the State Trunkline Highway System on May 13, 1913, a rough route patterning today's I-94 was designated Division 6.

The first stretch of freeway-grade routing was constructed immediately before and during World War II, designated M-112 and named the Willow Run Expressway starting in 1941.  From Willow Run, the freeway was extended through Romulus, Taylor and Allen Park in stages between 1943 and 1945. This section was named the Detroit Industrial Expressway. When it was extended into Detroit, that portion became the Crosstown Expressway.  Due to a petition being passed, this entire local segment was renamed the Edsel Ford Freeway in April 1946, the name it currently holds for most of its Downriver and Detroit route.

Original planning for the development of the modern Interstate Highway System in the late 1940s had this route actually pegged as Interstate 92 between Ecorse Township and Benton Harbor.By July of 1958, to accomodate the route having the same number throughout its distance, it was officially redesignated Interstate 94.

This stretch of freeway was intended to feature a high-speed streetcar line running the length of the median from Willow Run to the Detroit city limits in the mid-1950s, but it was never built.

The original portion of the freeway near Willow Run was first reconstructed and widened in 1972.  There were originally consecutive left-hand exit and left-hand entrance ramps at Southfield Road, Telegraph Road and Ecorse Road, causing many bottlenecks and chances for accident. The Southfield Road interchange was the first to be reconstructed in 1986. To improve traffic conditions (and to accommodate Super Bowl XL traffic), a new Telegraph Road interchange was constructed in 2003-04.