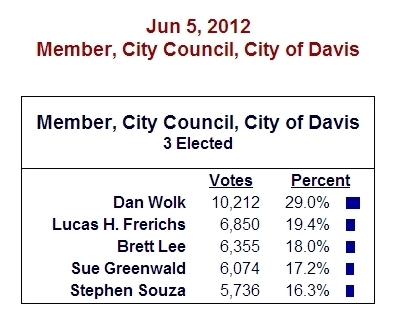 Official results here from the Yolo County Elections Division are in.

Early returns suggested DW would win easily — and indeed he did, taking first place in every single precinct. With 19.4% counted at 10:49 PM on the evening of the 6th, LF was next, followed by BL. SS and SG were and neck. But other than DW who seemed a shoe-in (no surprise there) Davis went to bed with the election up in the air. Looked like Measure D and Prop 28 would both win easily.

Since Dan Wolk garnered the most votes, he will be our next mayor (beginning in 2014).

Voter turnout was 12,645 of 33,355 Registered Voters (37.9%). It was lower than the turnout for the March 2012's Measure C, which is a little surprising. On the one hand, Measure C was a mail-in only ballot, but on the other hand, Davisites usually turn out for City Council elections (not to mention the other important issues on the ballot).

All in all, a bad night for incumbents, with the notable exception of appointed councilmember Dan Wolk; he now receives the blessing of over two-thirds of voters to continue on the City Council.

These are endorsements from newspapers that cover Davis, major Davis organizations, elected officials who currently represent Davis, and a tally of volunteers who currently serve on Davis commissions.

The five current members of the Davis Board of Education unanimously endorsed Lucas Frerichs, Stephen Souza, and Dan Wolk.

Also on the Ballot

know more? edit them in!