Daniel 'Dan' Wolk is a member of the Davis City Council. Dan has served on the City Council since 2011, and voters returned him to the Council in 2012. He was originally appointed by the City Council to fill the unfinished term of Former Mayor Don Saylor who was elected to the Yolo County Board of Supervisors.

Immediately prior to serving on the Davis City Council, Dan was the Chair of the Davis Social Services Commission.

He is a 1995 graduate of Davis Senior High School. He holds a B.A. in economics from Stanford University and a law degree from UC Berkeley Boalt Hall School of Law. He works as Deputy County Counsel for Solano County.

Dan is the son of California State Senator and former Davis Mayor Lois Wolk and former Dean of the UC Davis School of Law Bruce Wolk.

On June 15, 2013, Dan announced his candidacy for the California State Assembly. He would replace Mariko Yamada at the end of her term.

Dan and his wife, Jamima, and their daughters, Avery and Layla Dan grew up in Davis. The only city council member in decades to have done so, Dan attended Davis schools (including taking Mr. Willett himself in sixth grade at what is now Willett Elementary School) and graduated from Davis High School in 1995. Dan also participated in many of the activities children in Davis still participate in, including Rainbow Summer, AYSO, Camp Putah, Cub Scouts, Madrigals, Jazz Choir, and the Davis Children’s Nutcracker.

Dan holds a B.A. in economics with honors and Phi Beta Kappa from Stanford University and a law degree from U.C. Berkeley (Boalt Hall).

After college, Dan worked at the Federal Reserve and then the Public Policy Institute of California as a research assistant. After law school he worked with Davis City Attorney Harriet Steiner in the public law division of McDonough, Holland & Allen.

In 2009, he was appointed by the Davis City Council to the Social Services Commission. He was later elected Chair by his commission colleagues in November, 2010.

Dan Wolk has served on the Davis City Council since his appointment in 2011. Voters returned him to the Council in 2012 with more votes than any other candidate in Davis’ history.

As a City Councilmember, he has led efforts to adopt the surface water project, pushed for greater investment in the city’s roads and bike paths and explored sustainable energy initiatives.

Dan is also the founder of the Legal Clinic of Yolo County, a legal services provider for low-income families.

He lives in Davis with his wife, Jamima, a former professional triathlete and small business owner, and their two young daughters, Avery and Layla.

In his spare time, Dan enjoys cycling, running, camping, hiking, watching the Oakland A’s, and watching ducks at the UC Davis Arboretum with his daughters.

Dan was a candidate in the 2012 City Council Election. He took first pace in the election with 10,212 votes. According to Yolo County Elections, this is the most votes any candidate has ever received in a Davis City Council election. Dan also took first place in every precinct in the city.

Dan Campaigning for City Council at the Davis Farmers Market "Davis is my home town; I grew up here, and I want my daughters to enjoy growing up here as much as I did. If I am elected to continue my service on the City Council, I will do everything I can to make a stronger, better Davis for the next generation.

While I have accomplished much during my short tenure, we still face critical issues and decisions today that will define what kind of Davis we will leave to the future. If elected, I will:

Address Long-term Structural Issues in the Budget. We face massive, unfunded liabilities and structural, long-term budgetary challenges. I will work aggressively to ensure our City’s long-term fiscal sustainability in addressing the City’s future obligations, such as pensions and retiree health care. I will also seek ways to restore sustainable revenues by encouraging new and innovative forms of economic development. When cuts are necessary, I will prioritize our future by preserving city funding for children’s programs wherever possible. This is a new era of innovation, compromise, and change. We must be ready for new ideas and shared burdens to make our City sustainable. Safeguard our Water and Infrastructure. I will explore ways of funding new and existing city infrastructure improvements, and I will work to preserve and maintain our roads, bike lanes, and city green belts. Securing a sustainable water supply is an immediate issue for our city today, but tomorrow it will be a crucial issue for all of California’s communities. I will pursue surface water for our city in a way that is smart, sustainable, and affordable.

Prioritize Economic Development and the Downtown. Davis boasts a world-class university, an excellent K-12 school system, and is centrally located in one of the most fertile agricultural regions in the world. I see in our city the ingredients for a new Silicon Valley of Sustainability, an innovation hub for green technologies. I will make sure that the city stands behind, and not in front of economic development by cutting red tape, streamlining approval processes, furthering technology transfers from UC Davis and keeping those businesses in our community, and appointing a staff-level champion for business development. Moreover, I will work to make our downtown even better, by creating an Arts and Entertainment District, encouraging new entrepreneurial activity, making streetscape and building improvements, and bettering pedestrian, bicycle, and automobile circulation and parking.

Focus on Environmental Sustainability. I will develop smart, sustainable practices today to ensure a healthy, vibrant Davis tomorrow. I will explore innovative ways of expanding our community’s energy independence and a more efficient use of energy, such as employing a Community Choice Aggregation model, reducing our peak load through weatherization and other upgrades, expanding residential solar power, and pursuing our own public energy utility. I will manage our waste sustainably by partnering with DWR and others to pursue a community-wide waste reduction and composting program. I will follow a policy of smart, limited growth that helps us achieve economic and environmental independence, self-sufficiency and sustainability.

Pursue Affordable Housing for Seniors and Young Families, and Combat Homelessness. The demographic data are clear: our city is aging, and there are fewer young households. While there is no shortage of parents who want to move to Davis because of our safe and outstanding parks and schools, our existing housing stock is unaffordable and often not well suited to new families. No affordable housing for families means less funding for our schools and even school closures. At the same time, many aging householders who wish to retire and remain in Davis want smaller, more accessible housing. If elected, I will spearhead these issues and make attracting and serving young families and developing a “senior housing strategy” a top priority. I will also work to end homelessness in our community by 2020. Our community faces budget challenges and large unfunded liabilities in infrastructure, pensions, and health care; critical questions about environmental sustainability, such as where we will reliably source our water; and a changing economic environment, where we must find a way to develop a sustainable local economy while providing adequate and affordable housing for young families and seniors.

Only a short while ago, I asked to serve on the Council to make sure that we address these issues now instead of leaving them to our children. While I’ve done a lot in my short tenure to address these issues, there is much left to do. I hope to continue serving, and make a better Davis for all of us." -danwolk.org (archived)

In addition to individual endorsements, Dan Wolk was endorsed by the The Davis Enterprise and Sacramento Bee newspapers.

As part of his 2012 City Council Campaign, Dan starred in a music video of The Davis Song. The video can be seen here: http://youtu.be/If1LgiYOmx0

Mailer front and back

State Assembly Campaign Logo On June 15, 2013, Dan Wolk announced his decision to run for California State Assembly at Sycamore Park, next to Willett Elementary School, which Dan attended as a child. Dan was joined by his family and nearly 100 supporters at the event. He was introduced by his wife, Jamima, and talked about the top priorities of his campaign.

In his announcement speech, Dan said, “I am running for Assembly to restore the California dream for our children and grandchildren. Our state has been neglecting their future and that is unacceptable. In the Assembly, I will work to ensure we fully invest in public education, our infrastructure, our environment and our middle class.”

Assembly District 4 consists of Yolo, Napa and Lake Counties, as well as portions of Sonoma, Solano and Colusa Counties. It is currently represented by Assemblywoman Mariko Yamada. 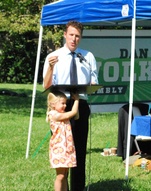 Dan Wolk Announces His Run for State Assembly Dan has been endorsed by more than 90 community, education, public safety and other leaders from all over the district. The list includes all five Davis School Board members and both members of the Yolo County Board of Supervisors who represent Davis.

2013-10-27 21:18:03   Thumbs up for the Davis YouTube clip The Davis Song (with city council candidate Dan Wolk)! Do you have this in HD too? IMO You could get more out of it if you do. So many Davis images we all recognize and then this great end with a variation on "Empire State of Mind"! —ConstantiaOomen