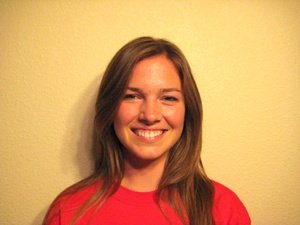 Lauren Thomas is a third year biological sciences major from Huntington Beach who ran in the ASUCD Senate with LEAD in the Fall 2007 ASUCD Election. She failed to win office. She is a current member of the ASUCD Gender and Sexuality Commission and is the Panhellenic Council inter-Greek relations chair. She is also a member of Delta Delta Delta and the Model United Nations. She has a facebook group.

My name is Lauren Thomas. I am a third year bio sci major. I am currently the Panhellenic Inter-Greek Relations Chair, Vice Chair of the Gender and Sexuality Commission. I am also on the Davis Womens Ultimate Frisbee Team. I am also a member of the Davis Model United Nations Club. As a Senator I am going to focus on two goals.

First I am going to improve the relationship between the Mondavi Center and the undergraduate population at Davis. The center has a packed calendar but very few students attend Mondavi events. This is due to two reasons: lack of publicity on campus and ticket pricing. I would have the Mondavi calendar publicized on campus through flyering and Facebook. To address the ticket pricing issue, I am working with the Mondavi Center Director to create a student ticket package where you would pay a flat rate each quarter and then get to choose any two events that quarter to attend. This would foster a better relationship between Mondavi and UCD students.

Second I am going to support student art. I am planning an art fair that would solely display student art. It would take place at the E street Plaza or the Davis commons twice per quarter. I would like there to be live music as well. This would help to bring the arts to every Davis student. I would also like to highlight the exceptional art students through an annual art contest. The winner would have their work displayed in the Mondavi Center and win a $500.00 scholarship prize.