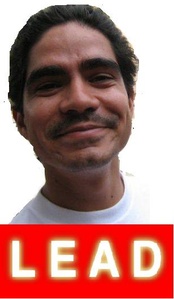 Johnathen Duran is a UCD transfer student from Riverside Community College majoring in Landscape Architecture and Native American studies. He ran for ASUCD Senate with LEAD for the Fall 2007 ASUCD Election, but failed to win office. He was a senator with Associated Students of Riverside Community College, was the Chair of the Ad Hoc Committe dealing with campus complaints and copliance, was the student representative on the Academic (Faculty) Senate, is a member of Latino Network Leadership Institute, a group of young college students dedicated to change and support in the "Latino/a" community, is the Northern Region Steering Committe Representative for the California DREAM Network, with which he has participated in numerous lobbying efforts in local congressional offices, in Sacramento and San Francisco, and in Washington, D.C. Johnathen is also active in MECHa's national organization.

Having spent 2 years volunteering for the University of California, Riverside/University Eastside Community Collaborative AmeriCorp Project in Education and Arts, Johnathen developed the "Getting Things Done" philosophy and has dedicated subsequent years of his life to community arts, advocacy for and with Immigrant communities, campus governance and relations, Indigenous Rights and many more great causes. He has planted trees, eradicated graffiti, landscaped, trash collected, worked with migrant farworkers, done community murals, participated in community forums and panels, given presentations on urban art and inner city youth culture, and has been a constant community advocate.

From Los Angeles originally (place of birth), Johnathen moved extensively, allowing him to develop an ability to adapt and integrate in the environments he is in and to make friends as easily. He graduated John W. North High School in Riverside, California and proceeded to travel the country and the state in efforts to broaded his horizons and his network. Having subsequently graduated from Riverside City College in June of 2007, and after breaking down the pros and cons of accepting entrance to each of the seven universities he applied, and was accepted to, Johnathen chose the University of California, Davis. Davis was the best decision because of its unique offerings of location, prestige, community, progressiveness, program and environment.

Johnathen is the second oldest child in a family of 9 children, 7 sisters and 1 brother. His mother Christina is a well regarded community activist in Riverside, California, working on social justice, controlled development, and race relation issues. He may have been considered the "black sheep" of the family-though he doesn't like that term-he became the first in his family to receive certifications (in Emergency Medical Services and Phlebotomy), to degree (Associate of Arts), and to enroll in an undergraduate program at a major research institution. He currently has two sisters in college (one at UC Riverside and one at Riverside City) and a brother in college (also a Riverside City).

Johnathen is always active and loves to be involved in multiple effots.

"Hello, I'm Johnathen Duran and I'm planning on being your next ASUCD Student Senator with L.E.A.D. I'm a third year Landscape Architecture major and transfer student, hoping to minor in Global Studies and International Relations. At my community College, Riverside Community College, I was a Student Senator. I have a lot of great ideas and goals for the campus and I want to see us, as a collective student body, advance to the places in life we are destined to be, but I need your help!

First, I want to get coin-operated massage chairs in the Griffin Lounge. Currently, students are very stressed during midterms and finals. I want to bring these relaxing chairs to the MU to help relieve this stress. Also, by charging a 25 cent fee, we will be able to bring in extra income for ASUCD. Massage chairs have been very successful at UC San Diego and at Harvard University, and I believe they will be very successful at Davis as well.

Second, I want to increase funding for the R.E.A.C.H. Retreat through the Cross Cultural Center. This amazing retreat promotes cross-cultural dialogue and mutual understanding between communities. This retreat should be expanded and more students should be able to attend so that we can improve our Campus Climate and promote an atmosphere of harmony at UC Davis.

On election day, VOTE JOHNATHEN DURAN and the L.E.A.D. Slate for ASUCD Senate!!!"