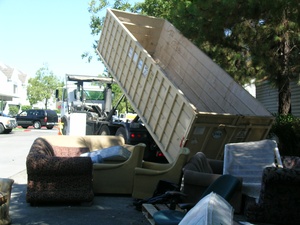 Dropping off a fresh Dumpster

Moving Day in Davis is always August 31... the day that nearly every lease in this town expires. Roughly half the student population moves to a new home. Many people are stuck with not having a place to move in to until their new lease starts sometimes up to 4 or 5 days later. Every U-Haul is spoken for months in advance (get on the will-call lease) by people wanting to move in one trip or simply need a place to store their possessions overnight. The roads fill with stuffed automobiles. Sometimes mattresses fall off cars. Apartment complexes place giant dumpsters in the parking lot, which are summarily filled by moving students, desperate to lighten their loads. Others in houses abandon goods in over-flowing garbage cans, on sidewalks and neighbors lawns. In short a HUGE amount of trash, dejected valuables and stress is created.

Moving day can be a real nightmare. Residents commonly spend two or three days packing, cleaning, and lightening their loads before they even start to move. Great quantities of stress are added to the equation for those who wish to recover their security deposit. Cleaning commonly occurs until the last minute they have to vacate their residence (often midnight 8/31). Requirements for professional carpet cleaning complicate logistics further.

To ease the packing process, a lot of people simply throw stuff out instead of bringing it with them. One day they'll leave a couch on the side of the road only to go searching for a couch for their new house in a few days. It is not just big items that are wantonly discarded. Many people will throw out things like tea pots and brooms that they will soon have to replace. Added to the nightmare are all of the uncertainties found in moving to a new place. Is that mold toxic?

To dumpster divers, of course, it's like Christmas. August 30 is Moving Day Eve. As one diver put it, "that's when Santa Claus comes around and fills the dumpsters with candy." Class attendance drops by about one-third during Moving Day week which usually happens during the close of Summer Session II. 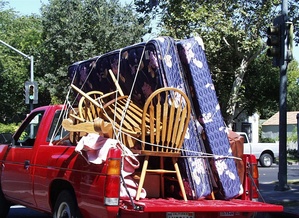 Not everyone rents a U-Haul

Those last two, of course, should be closely examined, and only kept if they're sealed and safe-looking.

Beware of sticky things or things with questionable stains!! Don't be ghetto, you don't want that. Try for college-student-poor-chic-style rather than hobo-that-licks-rocks-style. Do take second looks at things.

Do not take the term dumpster diving literally. Look before you leap, and all that. If it smells bad and there doesn't seem to be anything good, move on.

Paying for furniture is lame. Taking advantage of Moving Day to its fullest potential is a good way to live cheaply. It's also a good place to find "sports equipment" for a reincarnation of Office Furniture Olympics.

* What's the best time and day to find stuff?

If you are looking to lighten your load, but some of the stuff is in good condition, consider bringing it to R4 Recycling if you're on campus and maybe none of it will have to be thrown away. If you live off-campus, try donating the stuff you don't want. There are several local places that will take your donations. Check out the City of Davis Recyclopedia for places to bring your stuff for reuse and recycling. There is also DavisFreecycle; although you must become a member in order to post items, it is a handy and orderly way to allow others to reuse your items and, perhaps, for you to pick up an item or two in the future. Reuse—it's good for the couch, it's good for the chair.

As always, instituting a Free Box on your driveway can be one of the easiest ways to get rid of stuff you don't want.

Reduce the amount of waste you produce when you move Be a good neighbor and help us reduce waste: Reuse and recycle your unwanted packing materials.

Moving Boxes Recycle: Flatten and stack next to recycling carts at your community’s recycling area

Getting back your security deposit

For renters, getting back your security deposit is a big issue. See the security deposit survey to see how others have dealt with this issue, and consult the housing guide for tips on getting it back.