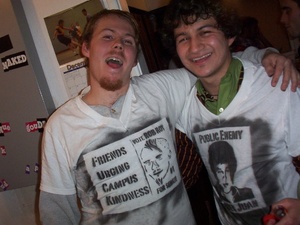 campaign t-shirtsFriends Urging Campus Kindness (backronyzed from "F.U.C.K.") was an ASUCD political slate in the energetic Winter 2005 ASUCD Election. They ran seven Senate Candidates for the ASUCD Senate. Candidates Rob Roy and Kristen Birdsall were elected. The slate evolved from the SOSSS slate that ran in the Fall 2004 elections, and the driving philosophy behind the candidate selection was "Hey, you — you should run for Senate! Anyone's better than who we've got now!"

In winter of 2006, likely due to disagreement regarding the unqualified candidates issue of the fall 2005 election, slate members Rob Roy and Kristen Birdsall renounced their affiliation with the Friends slate and declared themselves independents. As the only two elected members of the slate, this action means there are no longer any official Friends Urging Campus Kindness members in office.

It was a slate with real issues and a platform. The slate updated its platform page as the year progressed so students could see how the slate was keeping its campaign promises.

Check out some controversy here

The slate began the early stages of its campaign during the very first day of Winter quarter, 2005. and began speaking to groups, tabling, and producing campaign flyers and spray-painted t-shirts during the second week. They had become a prominent third party in UC Davis Politics.

The slate won 2 of the 8 available Senate seats in the Winter 2005 ASUCD Election, and candidate Rob Roy was elected in the first round. This showed a clear mandate for the slate and its policies. Candidate Kristen Birdsall, is another Friend who was elected and both are wiki regulars.

Friends Urging Campus Kindness Issues is an official list of what the slate supports in student government.

For a more in depth discussion of these issues and our current progress, consult the Friends Urging Campus Kindness Platform.

These issues can be summed up in three important points: 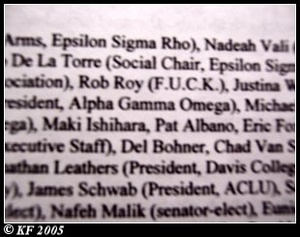 "Friends Urging Campus Kindness" appears on the official senate minutes, acronyzed with shocking consequences none of us had forseen - blame the dirty minds of Senate recorders!The slate's name was chosen because it forms the acronym "F.U.C.K." and RevChad wanted to know if The California Aggie would acronyze it like they do with L.E.A.D. The answer to this is no, as explained in Ryan Fuller's column in The California Aggie. 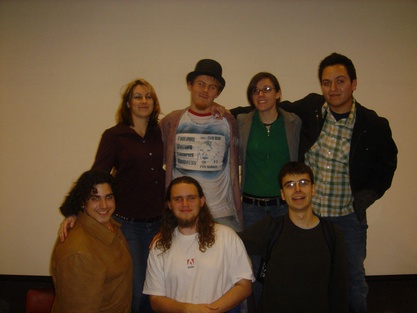 All of the Friends Urging Campus Kindness candidates in Winter 2005. All affiliates of the slate are named Official Candidates, as a matter of tradition. They are, in random order:

You may also find Urgers talking to Kris Fricke or Jonathon Leathers a lot. Rest assured that they are impartial and therefore not on our side.

During the campaign the slate had office "Hours on the Quad," an idea which many past senate candidates have promised. Their senators currently hold office hours on the Quad during lunch at least once a week.

During the campaign, you could look for the "Friends Urging Campus Kindness" towel taped to a table. A major goal of this tabling activity is to talk to students and find out what issues are important to them, and use this information to for a "Platform of the People." Friends Urging Campus Kindness also uses this time to make campaign shirts for anyone who brings them a shirt to spray paint with one of their selection of stencils and many color options.

Rob Roy also kept a detailed livejournals about his doing as a Senator. Rob Roy's Senate LJ. Kristen Birdsall began one but didn't keep up with it for long.

You also can find them at Senate Meetings, as there is some evidence that they attend regularly.

"Big Brother Rocks You" was the name of the event that Students for an Orwellian Society called the concert on the MU patio on February 23. The Playboy Millionaires performed and in between songs, candidates spoke about the importance of voting. Rob Roy also perform a verse from his rap live!

Official Candidate Rob Roy has made a most awesome music video! See the Friends Urging Campus Kindness take on other other slates, as well as their platform in rap music form. You might want to avoid this if you have virgin ears. Watch it on YouTube; it's also available for download.

Responses to "Will you vote for Rob Roy and Friends Urging Campus Kindness?" 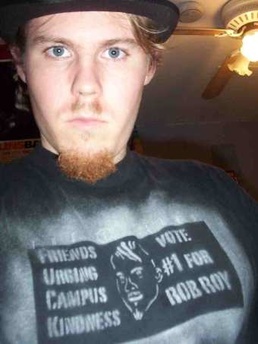 The Rob Roy #1 Friends t-shirt. Rob Roy spray painted t-shirts people gave him while he did office hours on the Quad. These people ran in the Winter 2005 ASUCD Election.

For the Presidential race, they have decided to support the L.E.A.D. candidates who have been very helpful to the Friends in making election reform. "These particular Leadites are considered good people, so vote for them".

They also have a list of campaign managers which includes:

They have two campaign advisors giving advice on the crucial issues in the swing frats.

Note that there is no head campaign manager, resulting in much chaos and furthering the myth that this slate is composed of a bunch of discordians. They have no official relation to the Campus Crusade for Chaos and Confusion, not that such an organization exists or anything.

Most importantly, their official mascot is Yev, also nicknamed "Checkers".

Here are some of the pro Rob Roy banners:

On a pleasant Monday afternoon, near the start of the Fall 2006 finals week, there was a gathering in the halls of the ASUCD floor of the Memorial Union, the subject at hand was the need of another organization to push for reform in the senate, rather than reuse the same organization which admittedly belonged to former students, a new organization is being developed, please see Friends Urging Campus Kindness, Education and Diversity, have a nice day.

Not really, but ASUCD Senator Maxwell Kappes has now self-affiliated himself with the slate until he gets bored or receives a "Cease and Desist" letter.

Comments or questions about anything

2005-02-18 14:18:35   Heh I like that Ari Kalfayan's "endorsement like statement" got in here. I think I had something else to say but I forget. Did Ian Watson make an endorement-like statement in his article about how he agreed with you guys on something (and coined the term "Urgers") ... and what about "Get the Urge!" as a slogan? —KrisFricke

An anonymous individual alledges that some of the tape used by "Friends.." caused paint to peel off their door. The said allegation is suspeciously close to some other allegations that Student Focus candidates had ripped down Friends.. flyers.

I'm glad that's done with, but I still think the Ghandi comparisons need to stop. It's sacreligious, and nothing short.

You may not, but out of respect to others, you should not be saying things like that.

2005-02-22 07:41:02   Jesus Christ, Chad. I walk away for a couple days and you start insulting religions. I just spent a weekend at Pantheacon, and they had now problem being tolerant of other religions — I heard less Christian bashing there than I normally hear at campus. I'll straighten these guys out when I get back. —BrentLaabs

2005-09-11 10:19:52   I think Ghandi would be pleased. He was all about kindness, and friends, and spreading kindness and compassion. I believe he would have seen Rob's endorsement as a sign of respect and affection. He was an extremely intelligent man, of course. —SteveDavison

2005-01-18 19:00:03   Impartial would mean being on the ASUCD Court and not sending out mass messages to ASUCD Slate facebook groups. No one talked about getting fired. I was an impartial third party member and now i am an impartial independent and I chose to confirm the members of two different political parties to senate because I thought it was the right thing to do. People should stop acting paranoid or childish because it is becoming contagious and has rubbed off on me. The session will be open. The elections committee had a closed session a few weeks ago and no one was fired. Kris Fricke has gone through a closed session and was not fired. Why would anyone think they would be getting fired. Does someone think they have done something that is worthy of it. I would hope not, all the senate intended to do when calling the closed session was investigate. So lets hold our horses and wait for tomorrow before we come to conclusions. If you want to know what the senate will do before that then visit the Davis Psychic, maybe they are still open - but you can certainly do it before 5:30 tomorrow.

2006-01-29 23:40:27   Why is the Friends Urging Campus Kindness facebook group, founded by Rob Roy, now just advertising his City Council Election? Can't we make him dissolve the group or something, so a non-Friend isn't using it? —MaxMikalonis

2007-04-05 22:11:12   In an alarmingly prescient manner, FUCK managed to predict the implications of the ASUCD Court Verdict that was just released. —MaxMikalonis

2008-10-16 03:56:18   I just spent the last few hours reading about F.U.C.K. and I love everything it stands for, I would greatly support the revival of this slate! Any old members still around wanna revive it legally? I'd definitely volunteer to help out! —mperkel

1. Ian Watson also stated, "So when I watched the Star Wars movies again I realized that the Empire could very well be the good guy." Thus the Urgers were endorsed by the same guy who endorsed the Empire.