LEADers at the R.E.A.C.H. Retreat 2007. Front:Albert Parnell, Madisyn Coniglio Middle:Molly Fluet, Naomi Amaha, Dwaimy Rosas-Romero, Genna Carnes, Darnell Holloway, Julie Hooper, Eddie de la Torre Back: James Schwab, Ravi Deepak, Kareem Salem. L.E.A.D. is an acronym for Leadership, Empowerment, Activism and Determination. Founded in the Winter 2000 ASUCD election at the R.E.A.C.H. Retreat, and active between 2000-2010, L.E.A.D. was the longest running ASUCD slate in modern ASUCD history. For most of its history, L.E.A.D. was the progressive, left-leaning slate, especially during the years where it fought for control of ASUCD against Student Focus and GO. L.E.A.D. won the executive office 7 times during the years it was active on campus, and at its height controlled 10 out of 12 of the ASUCD Senate seats. See also: Lead Wiki

"LEAD seeks to accomplish seven goals: Diversity; promote respect, equal opportunity and access, and a safe environment for all identities. Social Justice; empower and connect students to leaders and groups that help the underserved and underrepresented, that promote global prosperity and that uphold human rights for all persons. Environment; advocate environmental concerns as a significant priority in university decision making, increase student participation in groups and programs which conserve natural resources, restore environmental quality, and reduce the environmental impact of the campus and community. Student Quality of Life;increase the diversity of the student population, mental and physical health resources, and entertainment options; improve the resources and funding available to students and student groups. ASUCD Reform; develop and implement policies and programs that guarantee the integrity, transparency, efficiency, outreach, and access of the student government. University Reform; advocate for University policies that guarantee an affordable, diverse, safe and healthy academic and campus environment. External Advocacy; maintain a strong student voice in city, county and state governments through the advocacy of student-friendly policies and laws." 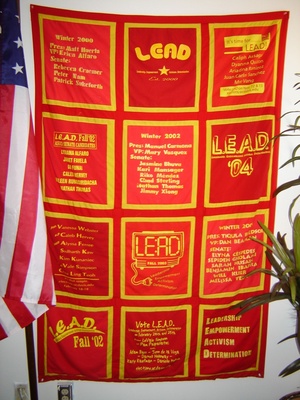 The LEAD Quilt, made from generations of LEAD campaign T-shirts. It once existed on the office wall of the ASUCD President, but it is now lost to the ravages of time.

This election was LEAD's worst in many years and resulted in the termination of the slate.

All six candidates were endorsed by The California Aggie

James Schwab was the campaign manager. Paul Harms was the Winter 2006 campaign treasurer.

The Davis College Republicans, under the direction of George Andrews, gave LEAD the DCR endorsement, helping to ensure the landslide executive victory.There was a L.E.A.D. Press Release discussing the accomplishments of the LEAD during spring of 2005. Treasurer: Usenima Inyang

Election results from the Fall 2002 Election. Voter turnout was around 8%.

There were no LEAD candidates during this election. However, some LEAD supporters, supported a similar slate: People's Collective

In response to massive violations of election codes on all sides in the previous election, the elections committee instituted a system of violation points. If any candidate earned three or more violation points, they would be disqualified. Each candidate was given a copy of this policy, the election codes, and signed a statement saying they agreed to follow the codes. Later, the LEAD ticket argued that the campaign agreement they had signed was "unconstitutional" and that they therefore didn't have to follow it.

The day after the decision, the LEAD candidates held a rally in which they bashed the decision as racist. At the same time, suspicious "KKK" fliers appeared around campus, resulting in the local paper "The Davis Enterprise" contacting the KKK's Grand Wizard in Indiana for a quote. They were likely posted by LEAD in order to play the victim and justify their accusations of racism. According to one student, "the first time I saw the flyer, I assumed that either [Bledsoe] did it or DCR did." At least one UC Davis custodian observed the an African-american and caucasian student posting the fliers during the wee hours in the morning. Although it was never proven, rumor had it that these two students were Tiqula Bledsoe and his campaign manager, Edgar Chen.

By the Fall of 2001, students were more angry than ever at Bledsoe. The television show "Politically Incorrect with Bill Maher" came to UC Davis and held an un-televised version of the show in the UC Davis Rec Hall. One of the panelists was Tiqula Bledsoe. As Maher introduced the first panelists, the 2,000 member audience politely applauded. But as soon as Maher introduced Bledsoe, the audience erupted with a resounding "BOOOOO!" that lasted for nearly a minute. Maher responded, "Wow! We'll have to hear what YOU did!"

There was no LEAD ticket in Fall 2000

LEAD in the NEWS

Slightly related, in an apparent attempt to copy L.E.A.D. at UC Davis, Sacramento State students established their own slate called L.E.A.D. (Leadership, Empowerment, "Action", Determination). It is unknown when this slate originated and it's connection with L.E.A.D. at UC Davis. 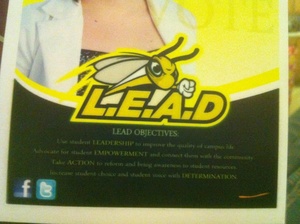 It's fine. At least they aren't the cancer that Is killing /b/ -wl