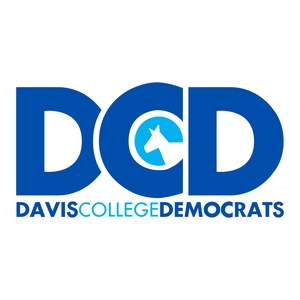 DCD is UC Davis campus representative of the youth branch of the Democratic Party. DCD is looking for motivated members interested in being involved in the nationwide grassroots effort of the Democratic Party to help you regain control over your lives, future, and country. Come to our meetings, precinct walk with us, bring your tired, your poor, and your huddled masses yearning to be free!

Dream it. Change it. Live it!

A Short History of DCD

Our earliest known records consist of photocopied SOAC (Student Organizations and Activities Center, the precursor to SPAC) registration forms dating back to 1982, with the Registration of "Young Democrats at UC Davis". At the time of registration, the club had 42 members.

The most recent incarnation of DCD occurred when Cecilia Escamilla-Greenwald and Scott Lay refounded the club and separately served as president in the 1990s. The club was formed as an alternative to the then-existing Davis Young Democrats, which the founders argued was too focused on campus politics and not enough on state and national issues and elections.

On November 12th, 2006 the DCD declined to endorse ASUCD Senate candidates by refusing to suspend its bylaws.

On November 26th, 2006 DCD members voted to approve a club constitutional amendment allowing them the ability to endorse registered Democrats running for ASUCD Senate and ASUCD President. Then prominent members Mario Lopez, Max Mikalonis, and Steve Ostrowski voted for the amendment while Joseph Bleckman and AngelaPourtabib voted against.

During the May of 2007, a second Constitutional Amendment updated the offices of the club, created new committees, resolved bylaw conflicts, and undid the November amendment, once again requiring candidates for ASUCD Senate and Executive Offices to be active members of the Davis College Democrats.

DCD hosted Bill Clinton @ UC Davis on January 15, 2008, where he spoke to a packed crowd of over 7800 in the ARC Pavilion, with another 3500 being unfortunately turned away. This was one of the many accomplishments that led to DCD being named the California College Democrats Chapter of the Year.

Members of DCD have become increasingly involved with the Yolo County Democratic Central Committee (YCDCC), where as of July 30, 2010 they held two of the six officer positions, and the Democratic State Central Committee (DSCC) which many prominent members won election to via the Assembly District Election Meetings (or ADEMs).

DCD had the honor of hosting President Bill Clinton on campus once again on October 9, 2012 in a rally to support Congressman John Garamendi, Congressman Jerry McNerney, Dr. Ami Bera (now Congressman), and Jose Hernandez for their election bids. Over 8,000 people were in attendance, and DCD was given the opportunity to meet and take a picture with former President Clinton, making for a memorable election cycle.

Voter Registration – Due to hard work and unique methods during an off-election year, DCD was able to register over 500 students to vote in fall of 2009 (half of which registered were democrats). This total ranked second amongst California College Democrats chapters and they were recognized for their efforts at Lake Tahoe with the “SuperObama” cutout they still use to table on the quad.

Campaigns – DCD was able to perform campaign invasions in Congressional District 10 for then-Lieutenant Governor John Garamendi and Assembly Districts 5 (which was flipped from Republic to Democrat in the 2010 election) and 9 (which we held following Dave Jones’s election as Insurance Commissioner). Throughout September and October, DCD connected interested students to the “Yes on Measure P” campaign in Davis, which allowed students to gain valuable campaign experience. In late-October and early-November, Craig was in Maine campaigning for “No on Question 1”, their equivalent of Proposition 8.

Lobbying – Due to the fact that it was on off-election year, DCD focused on getting its voice heard via lobbying. Throughout the year, they lobbied on behalf of higher education and voting reform. DCD met with the offices of four state legislators in Spring Quarter, but the best example of lobbying was in December when Craig and Vice President of Communications Kelsey McQuaid spoke before the Joint Committee on the Master Plan for Higher Education.

External Organizations – DCDers became deeply involved in outside Democratic organizations as a result of their work. Craig, McQuaid, Jack Zwald, and Max Mikalonis served as officers for the Yolo County Democratic Central Committee (as Secretary, Executive Director, Vice Chair, and Parliamentarian, respectively). Don Gibson served as the ’09-’10 Political Director for the California College Democrats and McQuaid and Mahood were elected as ’10-’11 California College Democrats Communications Director and Vice President of Finance, respectively.

The Davis College Democrats and People's Vanguard of Davis co-hosted a forum with all five candidates for Davis City Council on Wednesday, May 12th. Per organizational rules, only registered Democrats (Joe Krovoza, Sydney Vergis, and Daniel Watts) are eligible for endorsement, but both non-Dems (Jon Li and Rochelle Swanson) accepted invitations to participate anyway.

If you would like to read the Vanguard's coverage of the forum, you can see it here.

Our Accomplishments in Photos

Kelsey, Kevin, Baxter, Max, and Key at a rally for marriage equality.

DCD with Governor Jerry Brown at the Debate watch party

Take a Look at the New CA College Dems Site!

Check out the National College Democrats

Why we are Democrats!

2006-04-25 21:14:36   Well good thing the position is non-partisan... although word on the street says that the Republicans actually haven't endorsed him... but I'm sure whoever you heard that from wouldn't mislead you James —AngelaPourtabib

2006-07-25 22:31:56   Treasurer Joseph Bleckman was greatly pleased by the BBQ. With the leftovers he brought home he was able to eat for days. I'm disapointed though that none of the pictures truely captured my Evil Mustashe that I had back then. —JosephBleckman

2006-08-01 10:57:48   State party meeting this weekend in Burlingame! Anyone interested should join us in checking it out! —AngelaPourtabib

2006-10-03 23:30:24   I was rather pissed today at DCD. I planned on attending the "Meeting @ 8 PM at 212 Wellman". It was closed. Fortunately for many of the classes planning on meeting there, signs had been posted redirecting people to various places. No such luck with DCD. I went to Cafe Roma to see if maybe they'd congregated over there; no such luck. —SS

2006-10-03 23:47:11   We actually went to the Coffee House to have our meeting tonight. We didn't actually know that classes were redirecting people so I guess this time was just a case of bad luck. —AngelaPourtabib

It really wasn't bad luck. I'm not affiliated with the Democrat or Republican group on campus, but I received this message after joining the DCD Facebook Group. It was sent out just last night at 11:30 P.M. by your vice-president:

The DCD are Having their First meeting of the Quarter this Tuesday, October 3rd, at 8pm in Wellman 212. During this meeting we will be Revising and Discussing our plans for the following weeks, including when we can Table to Increase our Visibility, Promote our Candidates, and Educate the UCD Public on the Issues We Stand For. We have a Table, We have Materials, and We have a Plan... All we need now is For YOU to attend Our Meeting and Together We Can Make The Difference! See you tomorrow! Max Mikalonis Davis College Democrats Vice President

I showed up to Wellman Hall 10 minutes early. There were several groups and multiple postings of cancelled classes, groups that were being directed elsewhere and so on. It wasn't bad luck that I couldn't find anyone affiliated with DCD, nor was it bad luck that I used my phone to search the Wiki, your website as well as several administative pages on the Facebook only to not find even 1 contact number or update to find out what had happened. The only clue I had was that the Wiki mentioned you meet at Cafe Roma as well. Nothing was going on over there either.

Really, I don't mind the goof. It was a little disappointing, but it wasn't bad luck either. I only want to point this out now because it seems obvious you guys need to regroup on recruiting methods. —SS

2006-10-04 02:19:12   Saul, Perhaps we left too late, perhaps you didn't see us, but we did gather as a group by the lawn, there WERE people affiliated with DCD in the area, and several new members did come with us to the CoHo, though I do know of two other than you that slipped through the cracks because of the impromptu room changes. That being said, I can't control the plumbing in Wellman Hall, and our Main Event is actually NEXT Tuesday's Meeting as opposed to This Tuesday's, so everything else so far has been closer to Icing on the Cake. —MaxMikalonis

2007-05-30 22:54:24   Next year will be great with our new leadership and we will make sure those who weren't elected. I really hope that with next fall we can "rush" many more people into the great causes that we support. Also does anyone want to write a resolution in support of making sodexho employees UC employees? —DonGibson

2007-10-03 10:25:02   Cecilia Escamilla Greenwald told me about how the Davis College Dems came around in the early 90's, so she might have more information about how it started. Also, I'm going to ask George Andrews about Igor Berman who I believe was President of DCD back in 00-01 and then jumped ship to DCR, and which left the club a little disorganized for a few years. That's what I remember from a previous conversation with George and Avi. —JamesSchwab

2007-11-26 23:28:02   What rally did DCD and DCR both participate in? —JamesSchwab "they raised money for the families of fallen soldiers. I wasn't a big fan of how the rally went down (DCR insisted on the pledge and the national anthem) but there are worse things in the world people can devote their time to." Andrew

2014-10-29 08:11:15   I am annoyed and using Davis Wiki as a vehicle to voice my frustratation. On Tuesday, October 28th, 2014, the Davis College Democrats sent out a spam email to a large number of UC Davis organization, including graduate students in the Language and Literatures division, advertising a public speaking event later this fall. Over the course of the day I received over 48 messages that were "unsubscribe" requests. I am hoping this academic club wants to position themselves as a professional organization of new young political leaders. Such a breach in email etiquette doesn't really help their image. In short, Boo, College Democrats. —EricJensen