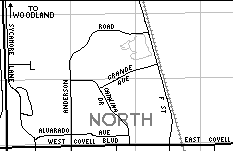 North Davis is Davis lingo for the area north of West Covell and west of F Street (and mostly east of Highway 113). North Davis contains many valuable Davis businesses, many of which are in the popular strip mall The Marketplace, as well as a number of housing complexes with very high student populations. It is also the location of the 2012-2015 North Davis Riparian Greenbelt Project to green the ditch running through the neighborhood.

Sometimes, business with multiple locations in town are referred to as being in West Davis, but are actually considered to be in North Davis. This applies mostly to Dos Coyotes, CVS and Safeway, since their North Davis locations are relatively more "west" than "north" from their other locations in town (either in South Davis or East Davis).

To confuse matters even more, "Old North Davis" refers an area of land that would currently be considered Central Davis. Remnants of the old designation remain, though, especially with North Davis School maintaining its original name. Town historian John Lofland has questioned the previous two sentences (deleting them in an edit to this wiki entry), although it is not clear what he considered incorrect. A clarification on the specifics of what is considered incorrect would be appreciated, as there is an entire association who maintain these facts, so it would have to be worded to reflect it being a common misconception rather than simply deleted.

Visitors to North Davis who find themselves going much too far north may very well end up in the municipality of Woodland.

See Navigating Davis for other regions.