East Davis is officially defined as "north of I-80, east of J Street and north of East 8th Street." In other words, it's everything north of I-80 and east Of J Street except for the square bounded by East 8th, J Street, I-80, and Pole Line. This square is part of Downtown Davis.

Informally, most people referring to "East Davis" are talking about anything east of the railroad tracks, and north of I-80. Bob Dunning likes to refer to the section of town immediately east of the tracks, south of Fifth, and ending at L Street as "Olde East Davis" while others call it The People's Republic of East Davis. That makes downtown the traditional square bounded by B to the west and H to the east, Fifth to the north, and First to the south. Historically, the actual downtown comprised G Street from Second to Fourth, and Second from F to G. The rest of the area between that and the university was primarily residential until during the 50s and 60s. "Old East Davis" is an area of Davis recognized by the city council, interested developers, and the Old East Davis Neighborhood Association. Additionally, there's a section of town recognized as Old North Davis.

Animal lovers are welcome too! The Toad Hollow Dog Park is a great place to take your furry best friend, or you can walk your pooch on the 3 greenbelts. And there's a Burrowing Owl Reserve. Owl's gotta live, man.

See Navigating Davis for other regions. 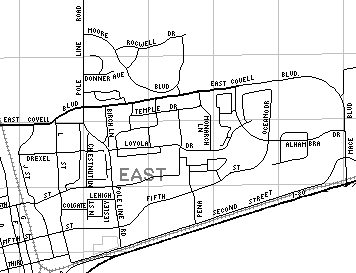 Traditionally, East Davis is defined by the railroad tracks

Show your love for the coolest side of town!