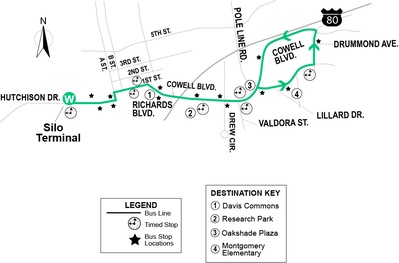 The Unitrans W Bus Line serves a large portion of South Davis, which contains one of the largest student populations in Davis. The line runs from Cowell Blvd. to Lillard Drive, and then turns on Dummond Avenue and loops back onto Cowell again before heading back towards campus. This route to the Unitrans Hutchison Bus Terminal runs every fifteen minutes during the day.

Most people consider the W line to be notoriously late. The issue of lateness arises from the heavy passenger load, but more frequently from Downtown traffic, and congestion at the Richards Underpass. Unitrans endeavors to be on time, but especially during the midday and afternoon hours, the traffic conditions make it impossible. The W line is also the second busiest Unitrans line.

To help ease the passenger loads in the mornings, an extra bus (a "tripper bus") will be sent to pick up the Cowell and Valdora Street stop. This is to help keep the regular bus on time, and to make crowding less of an issue.

During the afternoon, the W Express runs in addition to the W, leaving the Silo at 10 after the hour (departing up to 2 minutes before the regular W line). As of the 2013-2014 service calendar, the W-EX now drops off on Cowell Blvd. at Research Park Drive, Drew Avenue, and Valdora Street before heading directly back to the terminal. W line passengers getting off at any of these stops are encouraged to take the W-EX in the afternoon to keep the regular W line on time.

See below for weekend service.

Destinations on the W Line

Starting August 8th, 2015 the W line weekend service will be replaced with the M-Line.