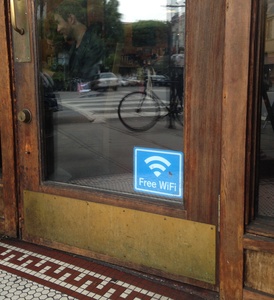 A sign advertising free WiFi outside of Bean There Cafe in the Lower Haight. Photo 2014.

WiFi stands for wireless fidelity, but that's not important as it's something some marketing droid came up with. What matters is that it's wireless Internet and that it's usually free. It can be found in tons of cafes, and public places like some library branches and BART stations.

In late 2005, Google proposed to launch ad/traffic-monitoring-supported, free-of-charge municipal WiFi in San Francisco, but the plan got shot down for various reasons.