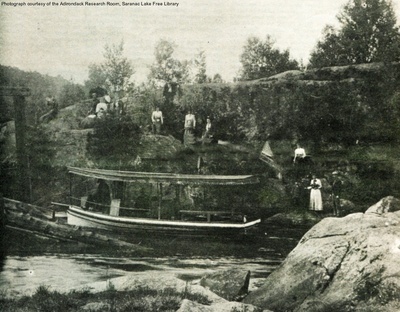 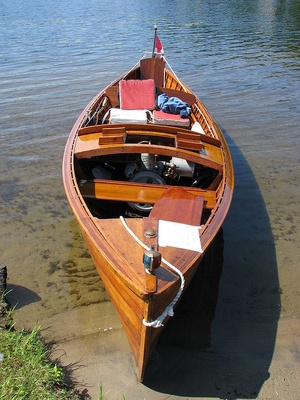 A former Saranac Lake resident, John Homburger, who now lives at Howes Cave, wrote to ask, "Why not an article on the fine old passenger boats that once ran on local waters?" So why not.

Certainly many senior citizens can remember such popular names as the Adirondack, the Ampersand and the Pollyana with well-known owners such as Captain Thomas, Fred Colbath, and Eugene Torrance.

Freeman Baker in his famous Blue Bird offered the typical cruise, consisting of a departure from Lake Flower, a trip through the river locks, and a tour of Lower Saranac Lake. The Blue Bird would leave Baker's Boat Landing at 2:30 p.m., arrive at the Ampersand Hotel at 4 p.m., and complete the 30-mile round trip at 5:30 p.m.

This scenic trip through the river and lake waterways was the pleasant result of many years of motorboat pioneering by local tyros who, like Fulton, were willing to accept a challenge. Beyond the reach of current memories, long forgotten names once graced the bows of powered pleasure craft piloted by their ancient captains through our inland water courses. The very first was a steamboat named the Water Lily, built by William Allen Martin and Fred W. Rice at Martin's Hotel on Lower Saranac Lake. Its inaugural cruise featured the onboard band of John Phillip Sousa and took place on July 4, 1878. It was designed to carry passengers from Martin's to Bartlett's Carry at the outlet of Upper Saranac Lake.

On Lake Flower, the No. 1 honor is credited to Charles Morse, whose electric launch offered a trip up the river during "fair afternoon weather." Steve Merchant brought a steam tug from Plattsburgh to haul logs to his sawmill at the site of the former Paul Smith's Office Building at the outlet of Lake Flower. Later, Joe Baker purchased the boat from Merchant to tow logs to his own mill and he named the scow the Platt. It was 24 feet long and eight feet wide with a four horsepower steam engine which produced a rate of speed far too slow for any passenger service.

When Baker's mill burned down, the Platt perished along with it. In a new enterprise, Baker launched the Alice, a 36-foot passenger boat with a cabin and seats for 25 customers. Joe was the pilot and his son, Ben, the engineer. These two improved the channel by blasting out rocks but only operated as far as the rapids at the present site of the lower locks.

When the Alice showed the way, Eugene Torrance decided to get in the act with the White Star, a very nice launch built by Harry K. Martin. Along came Ben Hall who bought the White Star from Torrance and changed its name to the Indian Maid. This boat enjoyed such success that Hall also purchased the Alice from Baker and ran both boats profitably. The Indian Maid, however, became the passengers' favorite and was the best known launch of that period. It was 38 feet long and was powered by a Lozier gas engine made in Plattsburgh. 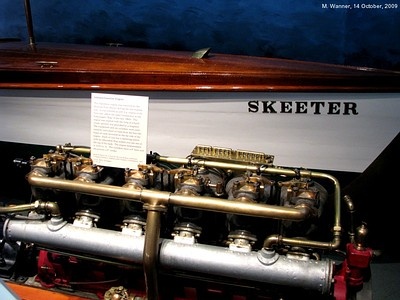 Engine of the Skeeter, a Charlie Keough restoration, at the Adirondack Museum 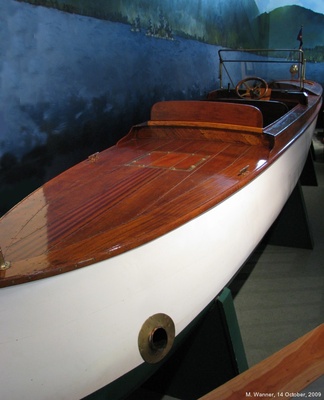 Skeeter, from the rear, Adirondack Museum

Next in line came the Cleo which carried groceries and an occasional passenger upriver. With this rather obscure boat, Captain E.E. Thomas began his career in passenger boat service. He purchased the craft from Dan Duffy, cut it in two and added 10 feet to its middle. From his boat landing on River Street, across from the present St. Bernard's School, he operated a highly successful business for many years. Another boat livery was located at 15 River Street, where Fred Colbath offered daily trips to the Lower Lake aboard the Arbutus, with "comfortable high-backed willow chairs for all." Round trip fare was $1.10, one way, 75 cents.

After Joe Baker sold the Alice to Ben Hall, he built a stern paddle-wheeler which he named the Wild Flower. Realizing that the craft was too large and too slow to serve the passenger trade, he converted it into a houseboat, the first of its kind in Saranac Lake. The idea caught on immediately and Baker built a few more for local-residents.

It must be remembered that many of these boats existed prior to the building of the state locks but the desire to travel beyond the rapids to reach Lower Saranac Lake could not be denied. A gate and windlass was constructed to draw the boat upstream and let it down on the return trip. At this point it was often necessary for some of the passengers to get out and help push the boat from the adjacent rocks. The clumsy procedure may have been more adventuresome than today's push button operation, but such is progress!

Aside from the passenger boat owners, there were some who decided that a rental livery could serve the needs of those who wished to "paddle their own canoe." John Devarney operated such a business on River Street in the 1890s before moving his establishment to Ampersand Bay. Burt Alvord also provided rentals from the old Algonquin Hotel Boathouse at the dead end of Algonquin Avenue. After the hotel was torn down, Burt's son, Earl, lived in the boathouse during the summer months and continued the venture. Nearby, at Crescent Bay, Harry Duso originated a rental and sales marina which is still operated by his sons. On Lake Flower, Freeman Baker and Capt. Thomas both ran combined passenger and rental services.

With all of this activity on the local waters, it was only natural for individuals to invest in their own motor launches and many residents took advantage of the easy access. Private boathouses soon dotted the shorelines, containing an array of smaller motorboats with nostalgic names. For the most part these were powered by gasoline engines, with an occasional naptha or electric drawing curious attention. Lee Gray had his Let-er-go, Morton Mills the Chums, John A. Galloway had the speedy Sally Waters, and even Freeman Baker had his, own pleasure boat, the Little Amp. Sam Tully owned a classy blue Fay-Bowen named the Dorothy T, to honor his wife, and the neighborhood children would suddenly make themselves conspicuously available for a ride whenever Sam warmed up the engine.

The camps on the Lower Lake also maintained boathouses which housed sporty runabouts and some larger launches. William N. Hanes, 1 of Winston Salem underwear fame, owned the To-ro-no, 2 named for his sister, Nona. Charles J. Swain ran the Otesaga, Mrs. McMartin the Here's How, Mrs. C. M. Hyde the Muguet and Ed Guggenheim the Miss Saranac. Each Summer the Saranac Boat and Waterways Club sponsored a regatta and the feature race would always be the classic hydroplane duel between Guggenheim and Frank Baker. 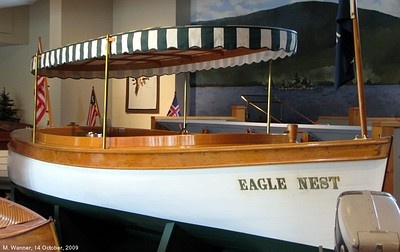 Eagle Nest at the Adirondack Museum

The naptha launch had first appeared in 1885 and for a limited time contended with gasoline engines. Eventually this innovation found its way to our local waters but with no sensational success. A few were operated by camp owners on the Lower and Upper Saranac Lakes as well as on the St. Regis Chain. Paul Smith added some to his hotel fleet to cater to those city guests who were leery of a tipsy guideboat. The guides, of course, viewed them with undisguised scorn.

The naptha's outstanding feature was its shiny brass stack, which was usually polished to a high gloss and easily recognizable from any distance. A drawback was the pervading fear that naptha fuel was too dangerous for use in a pleasure boat, although there is no record of an explosion. Occasional "blaze-ups" did occur, when an improper starting procedure would ignite excess fuel. One can still see the scorched overhead beams which bear testimony to such an ignominious event in the Knollwood Club boathouse.

Many of these early boats — the Fay-Bowens, the Loziers, and the napthas — are now coveted collectors' items bearing astronomical price tags. Several have been salvaged from beneath the waves of local waters to be refurbished to their former beauty. It is fitting that Charlie Keough should be involved in such restoration work since it was in his present shop on Lake Flower Avenue that Freeman Baker built the renowned Blue Bird. This summer Charlie completed restorative work on the Laura B, a Fay-Bowen which was a 1915 husband-to-wife Christmas gift from Mr. to Mrs. Bloomingdale of the Knollwood Club. 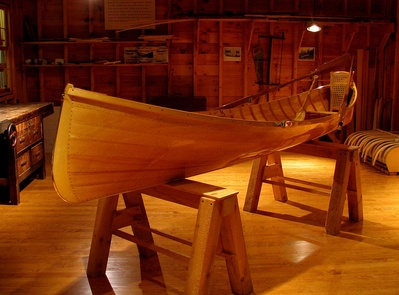 This guideboat was built at the Adirondack Museum as a boat-building demonstration. Some of Charlie's expertise is on display at the Adirondack Museum in Blue Mountain Lake where antique boats that once belonged to famous people can be seen in their original condition. In 1968, he restored the Skeeter, a 45-foot speedboat with a narrow beam of only 58 inches. Powered by a six-cylinder Speedway engine that weighed nearly 2 tons, its owner — R J. Collier of Magazine fame — could in 1906 claim possession of the fastest boat on Adirondack waters. From his camp on, Raquette Lake, Collier reached a speed of 25 mph, tops in its class at that time. Charlie also restored the Eagle Nest, a Lozier that was long ago owned by Harold K. Hochschild, founder of the Adirondack Museum, who, when he view the finished product for the first time, could only exclaim "Oh boy!"

From these early graceful motorboats there evolved to later mahogany hulls of the Chris-Crafts, Hackercrafts, and Gar Woods which are now high valuable collectibles. Fortunately, in our local area, many these old beauties have been preserved and are being pampered by their proud owners. Occasionally they may be seen majestically cruising in lake or river and, like the Great Adirondack Camps, may these venerable craft be with us forever.

Joseph Baker has launched a steamboat on Saranac Lake drawing seven inches of water and named the Wild Flower.

In the opening day's racing of the two-day regatta for speed boats on Lower Saranac Lake Wednesday, owners of two craft were hurled into the water when their boats were upset by the rough sea.

Black Bottom, driven by Hubert Stevens of Lake Placid, was one of the boats that overturned; the other was the Lamy entry of Saranac Lake. Both pilots were picked up promptly by a patrol boat.

The race was won by William Townsend's Greenwich Folly.

John A. Galloway's hydroplane, Sally Waters, took one heat in the race for speed-boats of 151 cubic inch displacement, while the other went to Blackie Pup from Sherbrooke, Canada.

The Greenwich Folly, 1926 and 1927 winner of the National Cup Championship, easily won the Adirondack free-for-all championship and the Hotel Saranac straight-away races at the annual regatta in Lower Saranac Lake Saturday. The Greenwich Folly tore through the water at well over fifty miIes an hour affording a thrill to the hundreds in attendance.

1. This is an error: William Marvin Hanes and his son, William Marvin Hanes, Jr., were owners of Camp To-No-Na. A.L. Donaldson seems to have been the first to change the middle initial to "N", and Duquette may have followed suit. However, the initial also appears as a "C" and as an "F" in other contexts
2. This must be a typesetter's error: since the sister's name is "Nona," the boat would not be named To-ro-no.