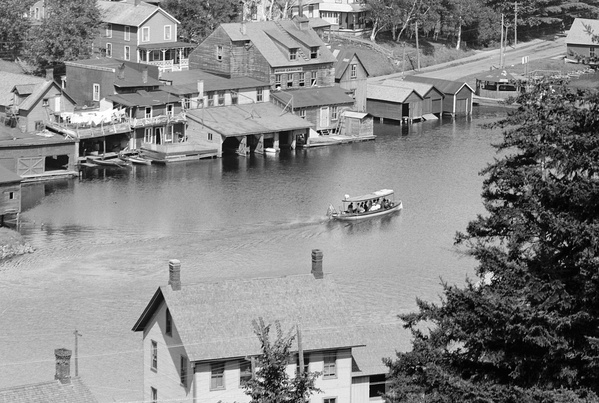 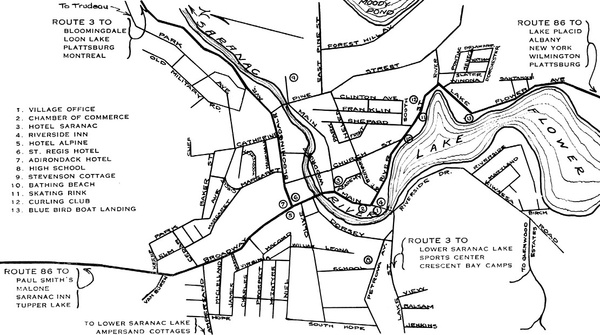 Schematic map of the village, c. 1930. Note that North is to the left. Courtesy of Mary Hotaling. We are fortunate to have a number of panoramic photographs of the village in its early years:

And for early maps of the village:

Laura Fay Smith declared in a letter to the paper that she thought the high costs of food, building materials and domestic service were holding back growth in the community. She urged that more foods be produced in the area, using agricultural methods found successful in the sandy soil of Denmark.

But the most serious cost, she thought, was that for domestics. "The lowest wage a maid can be hired for is $5 a week with room and board." she said, and declared that such "exhorbitant wages" are paid for work that is often badly done."

Editor Kenneth W. Goldthwaite said that one trouble with food costs in Saranac Lake was that everyone imagined they must have the best of everything to eat. He noted that at that time butter cost 30 cents a pound, carrots 30 cents a peck, tomatoes 15 cents a pound, grapefruit l0-15 cents each, oranges from 30 to 50 cents a doz., sugar 7 cents a pound, roasting chickens 22 cents, turkey 28 cents, lamb chops 28 cents, sirloin steak 30-28 cents, round steak 25 cents, pork chops 22 cents, halibut 30 cents, flounders 14 cents — all these per pound, and oysters 50- 60 cents a quart.

The average weekly wage of working men then was $12.50.

Mr. Goldthwaite declared that the cost of living was not higher than elsewhere and gave comparative figures to prove it.