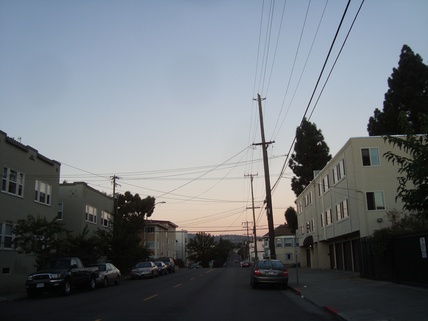 Ivy Hill is a neighborhood East of Lake Merritt between East 18th Street, Park Boulevard, Eighth Avenue, Ninth Avenue, East 33rd Street and Elliot Street. The hill itself is located along 7th Avenue and continues towards 8th Avenue and Ivy Dr with its lowest elevation along Park Boulevard.

Ivy Hill contains two Parks; FM Smith Park and Park Boulevard Plaza. Arbor Villa was located in the eastern portion of Ivy Hill from 1882-1931. The standing remains of the villa are the Arbor Villa Palm Trees which are at the edge of the neighborhood on 9th Avenue between East 24th Street and East 28th Street.

Housing is a mix: there are single family homes, duplexes, condominiums, as well as small and large apartments.

Alameda-Contra Costa Transit District has a couple of lines that run at the edge of the neighborhood: Line 62, Line 18, and Line 40.

Ivy Hill is a part of District 2.