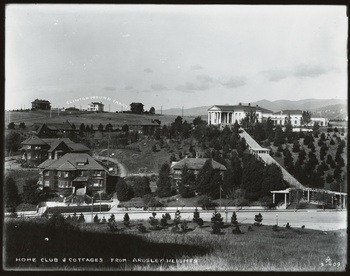 Mary R. “Mollie” Smith, the first wife of “Borax” Smith, founded a Home for Friendless Girls (an orphanage for girls) in Oakland.

Mary R. Thompson married F. M. “Borax” Smith in 1875. After reading Benjamin Farjeon’s Blade O’ Grass about orphans in London, Mary was inspired to begin adopting a number of homeless girls. In 1901, Frank gave her between 16 acres (some say 34 acres) just north of their estate and they created the Mary R. Smith Trust, and Mary started the Home for Friendless Girls. The trust was governed by a board of trustees of women of the First Congregational Church.

The Home for Friendless Girls included a central intake office, known as “The Lodge” at the corner of Park Boulevard (then 4th Avenue) and McKinley Avenue (then Cottage Avenue). The Lodge is now a private home at 2901 Park Blvd. Its front room still contains a built-in desk from its days as an office, and beautiful architectural details are preserved throughout the house. It was built by George W. Flick, who also built several of the cottages. It was built for $5,158, furnished for $1,387, and dedicated December 6, 1902.

In 1910, Jessamine Green was the secretary, and lived in The Lodge with her daughter Roberta Green. 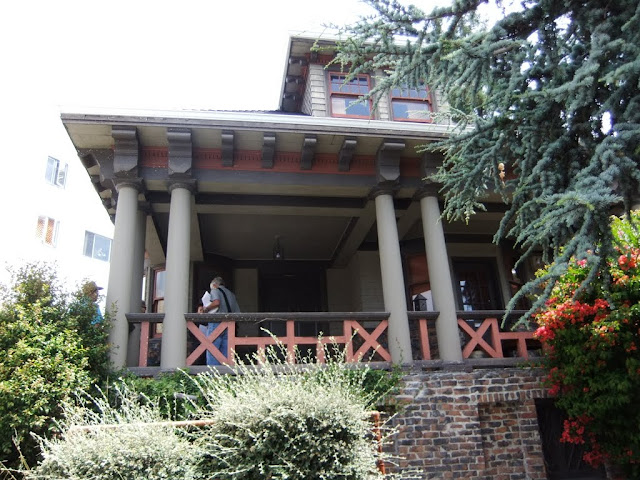 The Lodge
photo from Our Oakland 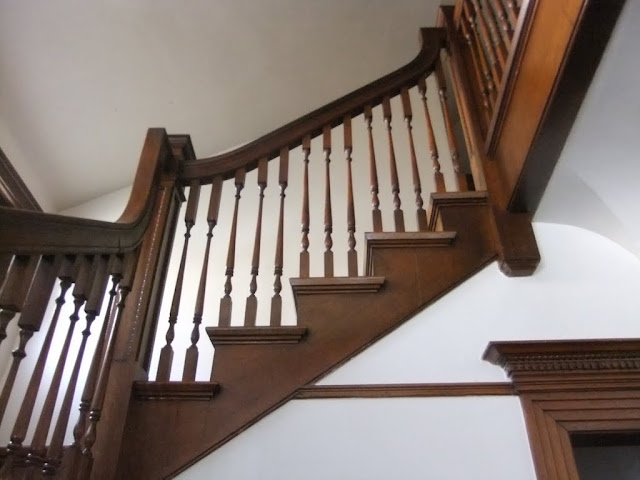 inside The Lodge
photo from Our Oakland 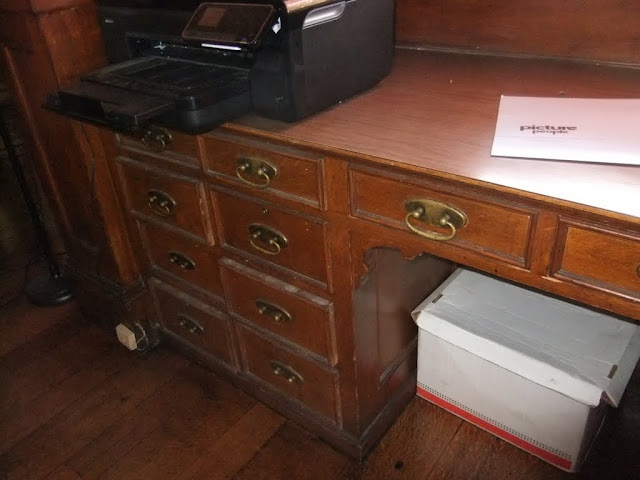 built-in desk in the office
photo from Our Oakland

The Home Club served as a community center and central clubhouse for the home, and stood near Grace Cottage. It could be reached via a driveway off of Cottage Avenue, or a by long arbor-covered stairway up from Fourth Avenue. It was designed by architect Walter J. Mathews, built in 1903-04 for $25-$30,000 with furnishings valued at $15,000, and dedicated March 24, 1904. The building was torn down for the construction of Oakland High School.

In 1910, F. H. Drake was the head of The Home Club, and lived there with his wife Nellie Drake, son Glenn B. Drake, daughter Mollie R. Drake (White), and son-in-law, Charles A. White.

There were between 9 and 13 cottages around the grounds where the girls lived, a number of which are still standing and are now private homes. The cottages were named for young women the Smiths knew: Evelyn, Florence, Grace, Josephine, Lila, Mae, Marion. Several of the cottages were designed by well-known architects. Each cottage had its own endowment fund, and was run semi-independently by a house “mother”. (Special thanks to Phil Bellman who leads the Oakland Heritage Alliance “Borax” Smith tour and provided the details on the cottages.)

Marion Cottage was the first cottage built in 1901, and was designed by Bernard Maybeck. Reportedly the Smiths refused to pay his $400 fee, considering it exorbitant. The fee was later reduced to $250, which they paid. The building is still standing at 2817-23 Park Boulevard, though remodels have covered many of the details. Documented in records at the Bancroft Library showing a contract between Mary R. Smith and BR Maybeck (source: Oakland Survey records), and is significant because it is one of only a few Maybeck buildings still standing in Oakland.

Initial Cottage, despite the name, was not the first cottage built; it was where orphans new to the system were “initially” placed (provisionally) until the cottage to which they were best suited could be determined. It was designed by George W. Flick, built for $4,350, and dedicated in 1902. The building still stands at 23-27 Home Place West.

Florence Cottage was designed by Walter J. Mathews in 1901. The building still stands at 1125-29 McKinley Ave.

Josephine Cottage was designed by George W. Flick, built for $5,300 and dedicated by 1901. It still stands at 1 Home Place East.

Evelyn Cottage was named for Evelyn K. Ellis, a ward the Smiths had taken in, who worked as Mary "Mollie" Smith' personal secretary, and who became the second wife of Frank "Borax" Smith after Mary passed away.  The cottage was designed by Julia Morgan, built for $5,900 and dedicated on December 28, 1906.  The home still stands at 3001 Park Boulevard. 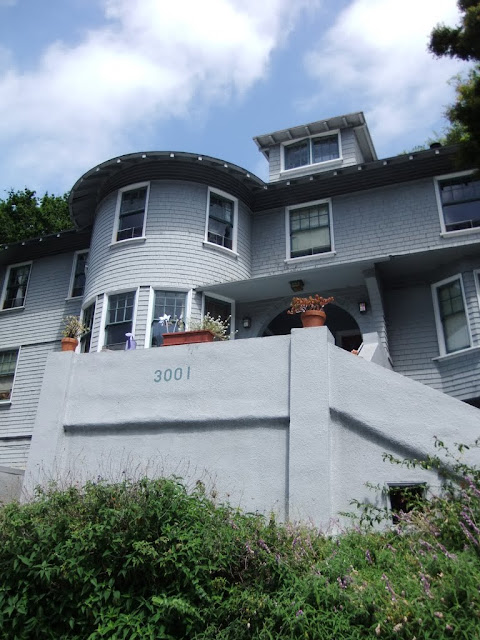 Evelyn Cottage
photo from Our Oakland

Evelyn Cottage
photo from Our Oakland

Grace Cottage was designed by architect George W. Flick and built about 1902. After a 1922 fire gutted the house’s upper stories, it was rebuilt as a one-story house. The building still stands at 1101-1105 McKinley Avenue. 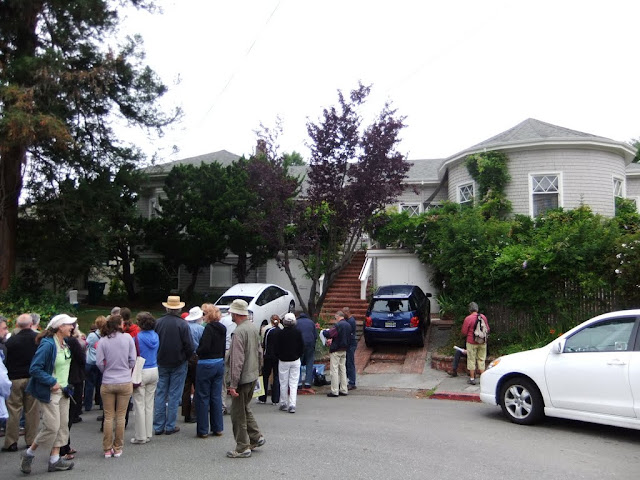 Grace Cottage
photo from Our Oakland

The Mary Evelyn cottage stood at 3015 Park Boulevard, and was designed by Charles W. Dickey. It is no longer standing.

Mae Cottage was designed by Julia Morgan, but is no longer standing. [ or is it, but heavily modified? ] 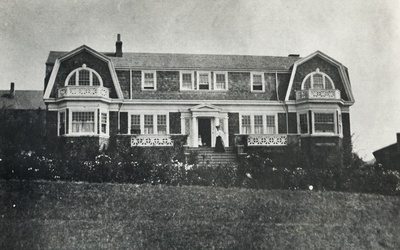 Lila Cottage is no longer standing. In 1910, Mary "May" Elizabeth Black, widow of Albert L. Black, was the house mother of Lila Cottage, and their daughter Dorothy lived there with her. Lila Cottage is not to be confused with Lilac Cottage, which stood on the grounds of Arbor Villa.

"Any girl that is in need of a home and worthy of aid is admitted to the cottages and she is always allowed to stay as long as necessary. There are from five to eight in a cottage and the ages are from four to twenty-five years. There has only been one death on Cottage Hill since the work was undertaken and there have been five marriages there. All of the girls attend the public schools, several have been high-school graduates and one has been graduated from the university. Another has been a student in the San Francisco Art Institute and several attend the Normal School. The number includes nurses, stenographers and teachers. They make most of their own clothes and help with the housework and have a real home life, under the direction of a matron in each cottage."

From an S.F. Chronicle article, “A Revolution in the Orphan Asylum System”, Sunday, October 11, 1903:

Just across the way from F.M. Smith’s magnificent East Oakland home the “Mary R. Smith Cottages” are nestled on a flower-bedecked hillside, close enough together to form a sociable group, far enough apart to preserve their individuality. Indeed, “individuality” may be said to be the watchword of this community.

See the 1912 Sanborn map of the area showing the locations of the cottages, The Lodge, and The Home Club: 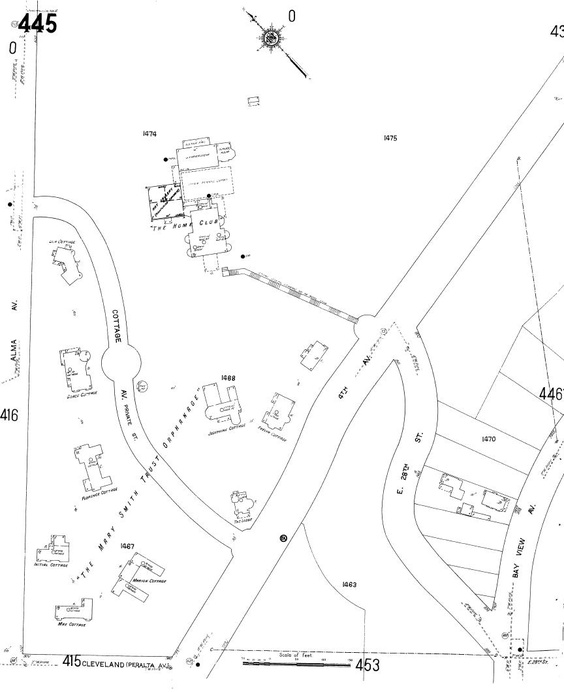