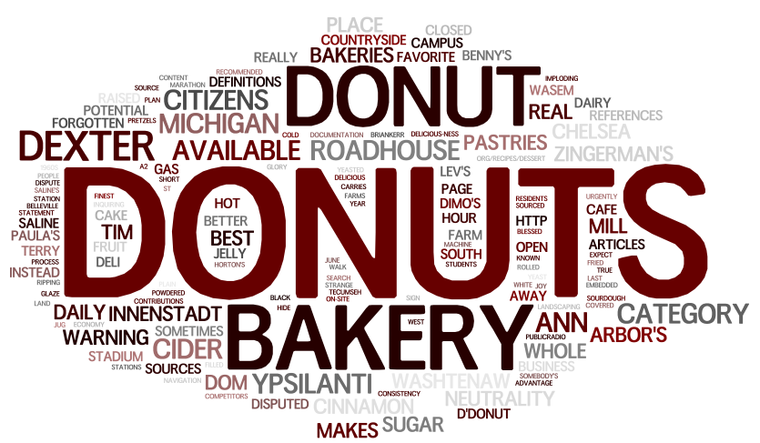 Real donuts are not available within Ann Arbor's innenstadt.

Outrageous Statement Ripping Through The Fabric of A2! 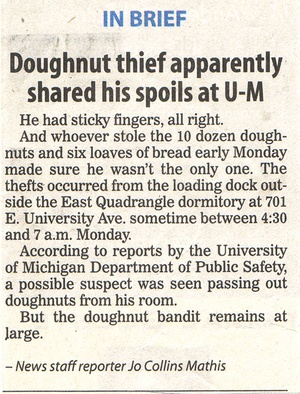 Donuts -- a valuable target.BREAKING NEWS CITIZENS: The 7-Eleven at State and North U has a case full of donuts, waiting for their first review.

Dimo's Deli & Donuts on West Stadium across from the Post Office still uses the classic Amy Joy recipes from the late 1960s, and are consistently a favorite once tried. 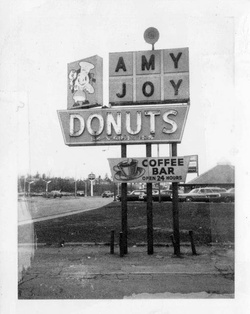 Most citizens love the delicious donuts at Washtenaw Dairy which are now free from all trans fat. Just make sure you get there early enough before they sell out! Espresso Royale loves them enough for them to sell them to you. Some do not enjoy them because they are cake donuts, not raised donuts (instead, they say, try a waffle cone instead).

Zingerman's Roadhouse makes donuts ($1.25 each in the drive-through). Take advantage of the imploding state economy, liquidate your whatever, have a donut! An embedded nanocorrespondent recommends getting sour cherry preserves with your ZingDonuts (tm), or a mind-blowing apple bacon donut. On select Saturdays in fall 2012, chocolate custard-filled donuts were available at the Bakehouse only.  The noted donut-aficionado magazine Maxim thinks these are some of the 10 best donuts in America.

Tim Horton's/Wendy's makes what some consider real donuts. The Tim Hortons in the Michigan League has closed, as has the Broadway location, but there are now two more: 1300 S University Ave (24 hours) and a Shell station at the corner of Ann Arbor-Saline and Eisenhower Rd. Other locations are on Hewitt (Ypsilanti) and Michigan Avenue, in Saline. There's a 24 hour Tim's on Rawsonville Road south of the I-94 exit - it's nominally in Belleville. Additional Tim's locations (with drive-thrus) are near the State and Ellsworth Roundabout and attached to the Shell gas station at W Eisenhower/Ann Arbor-Saline. They're kind of everywhere.

Although there is no local bakery outlet, Krispy Kreme donuts are available at Kroger's and several gas stations, including the Marathon at Maple/Stadium.

Hiller's sourced their donuts from Dom Bakeries. It's unlikely that the Kroger store replacing Hiller's will do the same.

The Homes Campus features Dozer coffee with a variety of modern doughnuts that vary week-to-week.

Ypsilanti is blessed with better: Dom Bakeries, on Washtenaw, is open 24/7 (cash-only, ATM in lobby).

A Dunkin' Donuts, much to our chagrin, has opened at Hewitt and Ellsworth- just west of Ypsi-proper, just east of the Wal-Mart (circa late 2009). Another Tim Hortons opened in early 2014, at Hewitt and Washtenaw--but, seriously, Dom's is less than a mile away.

Saline's favorite donuts are at Benny's Bakery, though people really line up for their pretzels.

As of May 2014, Chelsea has been home to the Chelsea Bakery, owned by Saing and Kim Yam. Specialities include a wide selection of cake, yeast and filled donuts, as well as fritters, muffins, danish and pretzel sticks. The Yams also own and operate the Pinckney Bakery.  Chelsea residents once soothed their donut-starved innenstadt compatriots with donuts from Pierce's Pastries Plus, which closed its doors around 2012.

Try the namesake Dexter Bakery or the Dexter Cider Mill.

The best donuts in the area, better than all urban competitors, are at the orchards, like the Dexter Cider Mill, Wasem Fruit Farm or Wiards Orchard. The Dexter Cider Mill fries their own on-site, so you walk away with bag of hot, greasy, fried delicious-ness. They come with either cinnamon sugar or some glaze. Cinnamon is recommended, as is a jug of cold cider. Wasem's has a donut making machine in plain sight, with the full-fat glory of the process revealed to all. You can smell the donuts cooking fresh daily as you enter Wiard's Orchard country store. Enjoy one of the many home made varieties.

In the far, far away land of Stockbridge, you can also expect delicious old-lady-crafted donuts from Gee Farms; enjoy them while you plan your landscaping.

Lev's Bakery in Tecumseh gets a nod, if you are that far south.

The "cronut", the hybrid spawn of a croissant and a donut, is a trendy bakery item invented in New York City. Neil Crockett of Uncle Neil's Bread and Donuts brought his version of this delicacy to the Ann Arbor Artisan Market with front-page coverage in the do(nu)tcom in August 2013. From time to time, these are available at Roos Roast as a "Bronut" (seen in the wild in July 2014).

Gone but not forgotten

Paula's Place was the closest source for Dexter Bakery imports, but she closed her doors in 2010.

Campus Donut Cafe was a short lived 24 hour donut place on E. William St; it opened in 2000, won "Best New Business" from the Daily, and closed within the year.

A grainy black and white photo of D'Donut Whole is all that is left from that 1972 business.

The Quality Bakery was loved for its sour cream donuts.

Donut-Time USA dates from 1974; little is known about it, except that it's gone now.

The bakery of James Clark in Ypsilanti faced a donut-related fire in 1908:

Geo. Renton, the baker, was making doughnuts, when the grease caught fire. In attempting to put the fire out, the kettle containing several gallons of boiling grease was tipped over. The burning grease spread rapidly, and in a minute the whole room was ablaze. The fire department responded promptly and soon had the fire under control.


Does anyone know anything about Weir's Donut Shop that was on E.Hoover near Brown St in Ann Arbor around the 1920's or 1930's? It later became the University Creamery. I saw it listed in the Polk Directories, but can't find any other info on it.

Dawn Food Products supplies donut-making ingredients to donut shops; based in Jackson, it changed its name from Dawn Donuts in 1977.