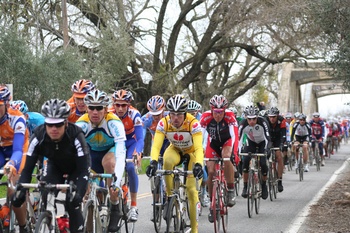 The cyclists ride past Stevenson Bridge during the 2008 Tour. Photo courtesy Steve Macaulay

The Amgen Tour of California is a professional cycling stage race that passed through Davis every year from 2007 to 2010. The first two years the race just passed through town, but in 2009 Davis was selected to host the beginning of the first stage of the race.

The Tour of California is a nine day race that covers over 800 miles through the state. The route changes every year but typically includes the California redwoods, wine country and the Pacific Coast. The Tour usually causes major traffic and circulation disruptions in town since so many streets must be closed to accommodate the race. Fortunately these impacts are very temporary, but if you need to get somewhere on race day it can be a real pain.

Every year, more and more spectators came out to watch the riders zoom by. City leaders and bicycle enthusiasts saw the race as an important step toward establishing Davis as the bicycle capital of the world. Whether or not it helped accomplish that goal, the Tour of California quickly became a Davis tradition. Unfortunately, Davis has not been a part of the tour since 2010.

There will be no prologue in this edition, but rather a full first road race stage from Nevada City to Sacramento. Monday, May 17 will see Davis again hosting the start of the second day of racing, with the stage ending in Santa Rosa as it did in 2009. The stage will start at 11:00 am, with a 3 mile neutral section loop downtown, then the race proper will begin as riders reach Russell Blvd. heading west out of town. The date was moved to May in part to make the race a natural part of preparation for the Tour de France, and this can be seen in the quality of teams and riders who will be taking part.

Be sure to check Unitrans’ website for information about bus service disruptions.

Following the Prologue in Sacramento on Saturday, Davis will host the start of stage 1 on Sunday, February 15, 2009 which will end in Santa Rosa. After the professional racers depart, the Davis Bike Club will host the Davis Junior Criterium for juniors age 10-18. The course will be a clock-wise loop on the streets surrounding Central Park.

You can find a lot of information about the Davis leg of the tour here: http://tourofcalifornia-davis.com/

The race will pass through Davis on Tuesday, February 19, 2008. Russell Boulevard will be closed for 15 to 20 minutes at some unknown time between 12:30pm and 2:00pm. This means that campus will be inaccessible from the North (via La Rue Road, California Avenue, Howard Way, or A Street). This will result in unpredictable Unitrans service for the entire city. It is recommended that if you need to come to campus between 12:30pm and 2:00pm to come before those times to avoid being stranded North of Russell Boulevard.

Video of the cyclists as they turn onto F Street downtown. Another video of the race going through downtown Davis that is a reverse view of the above and highlights what you see in person that is not shown on television.

On Tuesday, February 20, 2007, Stage 2 of the race traveled from Santa Rosa through Davis to Sacramento. Volunteers assisted as Course Marshals when the race reached Davis at approximately 1:30 p.m. Davis featured the second sprint bonus location of the stage, wherein the first riders to the line at Second Street, just before E Street, received sprint points and small time bonuses. The first sprint bonus location of the stage was in Winters. As the riders came through Davis, Christophe Laurent of team Crédit Agricole was the first to the sprint line, just beating out David Mccann of team Colavita/Sutter Home. Omer Kem of the Priority Health Cycling Team was only a couple of seconds behind. These three breakaway riders had a lead of almost three and a half minutes on the peloton as they reached this point. However, this lead quickly evaporated as they left Davis, and was non-existent by the time the peloton reached West Sac. Juan Jose "JJ" Haedo of team CSC went on to take the stage in Sacramento.

The leaders, tailed down B Street by a camera crew. 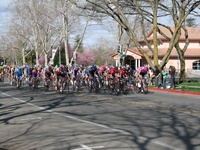 The peloton rides past Third and B. 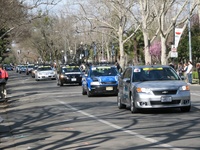 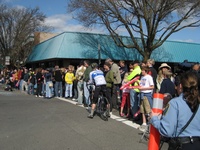 Crowds gathering in front of Freewheeler 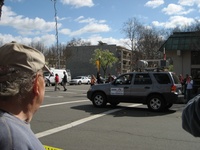 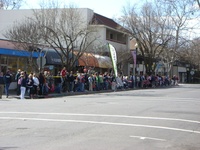 Crowds waiting at the sprint point in front of Mishka's 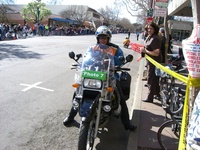 Off duty officer acting as a photographer taxi 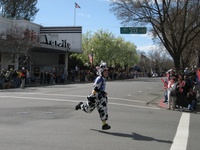 Share stories from the Tour of California in Davis

2007-02-20 20:58:04   Took the bus downtown (which ended up being the best idea) with the kids and arrived just in time to see what I think were the first riders pass through. Then we saw the peloton whiz around the 2nd and B corner, followed by the support vehicles. And afterwards, a friendly gent from the Davis Bike Club declared, "Well, that's it!" and the crowd disbursed. All in all, a very exciting three minutes. We were still glad to go and give support! —KevinChin

2007-02-20 21:13:31   The real crowd and action was at F and 2rd street. That's where all the news crews had set up. It's the big turn from 2rd onto F, followed by the straight sprint across up Davis. There were people on the rooftops of the Varsity and the bike store on the corner. Toyota had workers passing out chalk and tons of those inflatable noisemakers (Thunderstix). The three in lead passed by, a minute or two passed, and the peloton took the curve and raced off, looked awesome. —ES

2007-02-21 00:36:15   I watched near my house out on Pole line Road, just North of Covell. Quite a few people came out even up there. I put some pictures and videos up http://daviscalifornia.blogspot.com. Lots of people were out there really early - under the impression that the time of arrival was more predictable than it turned out to be. I kept checking on the web until they said the leaders were between Winters and Davis and then I headed over. —JonathanEisen