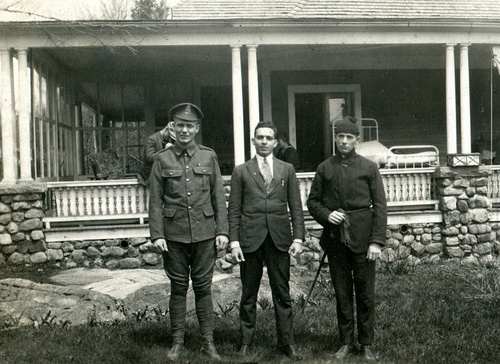 The caption reads "Newman Alfonso English 1919." The setting of this and several other photographs of these three individuals suggests that they were roommates at Trudeau Sanatorium in 1919. The uniform and the date suggests that Newman saw military duty, though his obituary mentions neither the military nor tuberculosis. Courtesy of Lynn Newman. 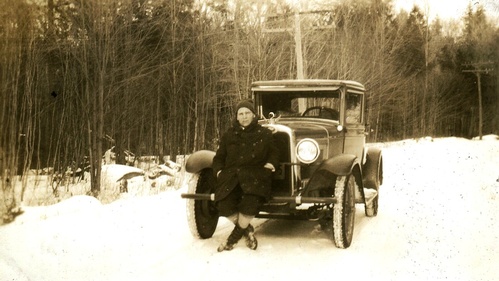 This photograph is captioned "V.N. State Road 1/13/29." It is from an album of Verdo Newman, and the context suggests that it is New York Route 3, near Lower Saranac Lake. Courtesy of Lynn Newman. 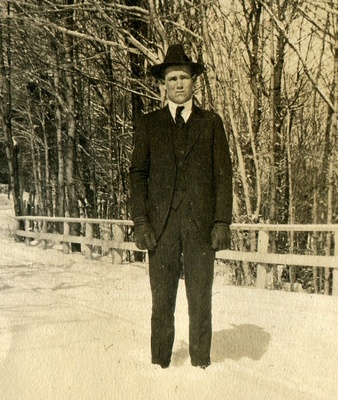 Vendon Verdo Newman came to Saranac Lake in 1918. In 1934, in partnership with Rex Holmes, he purchased an existing paint and glass business that became Newman and Holmes. In 1953, Mr. Newman purchased the Holmes interest in the business.

Verdo Newman, 60, owner of the Newman and Holmes paint and glass store on Bloomingdale avenue, died suddenly at his home at about 5:30 this morning of a heart attack.

His body is at the Fortune Funeral Home in Saranac Lake where services are tentatively set for Sunday.

Survivors include his wife, the former Alice Sullivan, whom he married in 1931 in Saranac Lake. There are two daughters, Mrs. Theresa Sheil, of Long Island and Linda, of Saranac Lake, and one son, Wayne, also of Saranac Lake. A brother, Dan, of Fairfield, Conn., also survives.

Mr. Newman was born in West Virginia July 20, 1897, a son of Charles and Arabelle Perry Newman. He came to Saranac Lake in 1918 and in 1934, in partnership with Rex Holmes, purchased the paint and glass business of Clarence Wood. In 1953, Mr. Newman purchased the Holmes interest in the Newman and Holmes paint and glass business from the Holmes estate, and continued to operate it privately until his death. Mr. Newman was a member of the Masonic order.

A photograph album kept by Verdo Newman in the 1920s supplied photographs for the following pages: