Chinese Americans were essential in the development of Oakland, and the city served as an important destination for Chinese immigrants after the Gold Rush.

The Chinese American communities had tumultuous beginnings. An economic downturn in the 1870s and a labor surplus after the transcontinental railroad was finished fueled anti-Chinese sentiment throughout California.

On May 27, 1876 Dr. C. C. O'Donnell, President of the Fourth Ward Anti-Coolie Club delivered an anti-Chinese address which upset residents of Chinatown. In response the Oakland police department cordoned off the area in an effort to minimize violence. Unfortunately, sentiments of groups like the anti-Coolie Club became national policy in 1882 when Congress passed the Chinese Exclusion Act. 1 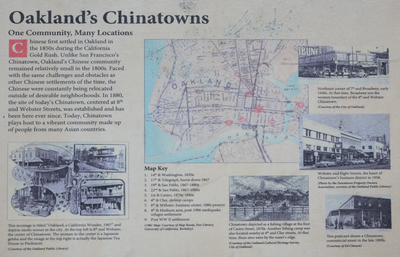 from display at Lincoln Square Park

Of the five Chinese settlements in Oakland, one burned down mysteriously and two others were forced to relocate. 1

The community at 19th Street and San Pablo Avenue was designated Oakland's official Chinatown by the city fathers. The neighborhood was on the outskirts of the city but later became more valuable as development spread uptown, and the Chinese were forced out. 1

Some Chinese moved to West Grand Avenue and settled with other newcomers along rail lines, but more put down roots at 8th and Webster, the spot that would become the hub of Oakland's Chinatown. 1

The neighborhood flourished as Chinese were attracted to the East Bay's climate, fertile soil and growing economy. Chinese built dams in the East Bay hills and took low-paying factory and railroad jobs. They grew fruits and vegetables and peddled their produce throughout the East Bay from pole baskets and later from trucks. 1

An article in 1889 noted that Chinatown was shrinking. Buildings near 1st and Market were razed and the only parts of Chinatown that were left were those blocks in the very center of the city: the block bounded by Webster and Franklin and 8th and 9th. The article also notes that fifteen years earlier there had been 3 times as many Chinese people in the city. The article speculated that the Japanese population was displacing the Chinese one. 3

San Francisco's Chinatown was virtually destroyed in the 1906 earthquake. Numerous residents fled San Francisco for Oakland and the East Bay, including former residents of its Chinatown. A 1906 Tribune article said that there were over 20,000 SF Chinatown refugees in Oakland, plus 3,000 in Sacramento, and 1,000 each in Stockton and Fresno. 4 A camp for them was set up near Lake Merritt (the above map says 4th and Madison, which was near the then much wider channel between the lake and the estuary). While much was made of Oakland's response to earthquake refugees in general, the former SF Chinatown residents were not welcomed with open arms. One exception was Lew Hing, owner of the Pacific Coast Canning Company. He welcomed refugees onto the grounds of the cannery, purchased tents, and hired cooks.

As with earthquake refugees in general, many of the SF Chinatown refugees ended up staying in Oakland even after San Francisco rebuilt.