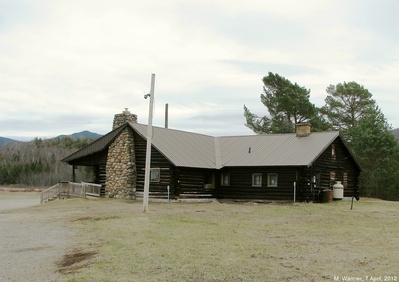 The Saranac Lake Fish and Game Club on the Saranac River

The Saranac Lake Fish and Game Club has existed since at least 1905. They maintain a clubhouse on the Bloomingdale Road, built in 1933 on the banks of the Saranac River.

Past presidents of the club include Francis Berger Trudeau and Robert Liddy. Willis Currier was the club's director for many years.

For many years, the Willard Hanmer Guideboat Race ended at the clubhouse, where a community picnic was held.

The Saranac Lake Fish and Game Club at its regular meeting last Thurs day evening decided to circulate a petition asking the Conservation Commission to rescind its order, issued early in May, allowing the use of set lines In waters not inhabited by trout from May 6th to September 30th inclusive. The petition was circulated this week and many signatures were obtained.

Secretary Franklyn Musselman explained that the Club wanted Lower Saranac Lake, Lonesome Pond and Colby Pond to be exempt from the application of the order on the ground that they were full of yellow perch, which are the favorite food of the lake trout. The latter would take the perch and destroy themselves.

The order applies to whitefish, bullheads, catfish, eels, perch, sunfish, carp, mullet and dogfish. Most of these fish are not found in waters about the village. Division Chief Game Protector Byron A. Cameron said a couple of weeks ago that waters inhabited by lake trout are not necessarily considered trout waters. Lower and Middle Saranac Lakes, and Oseetah Lake and Lonesome Pond or Lake Kiwassa are not classed as trout waters. Lake trout have not begun to show up in Lonesome and only to a very small extent in the Lower Saranac, in spite of repeated stocking. Mr. Musselman said the Club was afraid all their work of fish planting would go for nothing.

The Club also went on record as favoring a greater number of game protectors to assist Mr. Cameron, who they claimed was obliged to neglect this vicinity.

The Club decided to circulate a subscription list to secure the rest of the funds needed to defray the cost of planting the slopes of Mount Baker with white pine, which was done about five weeks ago.

Steps for the completion of the club house of the Saranac Lake Fish and Game Club will be taken Thursday evening at a meeting in the Conservation Commission office at Saranac Lake. Members of the organization are urged to be present to hear the report on progress made thus far towards establishment of a shooting range at the site leased on the St. Armand race track property. It is planned to make the club" grounds a popular center for hundreds of annual visitors to the Adirondacks. The club plans the organization of rifle and trap shooting teams to compete with visiting marksman.

With a view to stocking the Saranac River between Saranac Lake and Bloomingdale with brown trout, representatives of the New York Biological survey are testing samples of the river water this week.

Dr. Emmeline Moore, chief of the survey, and an assistant are assisted in their work by officers of the Saranac Lake Fish and Game club.

Until recently the river has been unfit for fish because of pollution from untreated sewage. Now, however, the municipal sewage disposal plant has been in operation for almost a year, and club members feel the river water is suitable once more for fish life. An effort will be made, if the tests are satisfactory, to have the river stocked with trout this fall.

Progress on the Fish and Game Clubhouse is witness to the fact that when many hands unite much can be accomplished. The sides of the building are coming along in fine fashion as well as the mammoth fire place that will spread warm cheer in months to come.....Yesterday some of the volunteer workers were hard at work on the project. Herbert Williams, Frank Knapp and A.H. Bernard were taking steady blows with the hammer while Edward Burdo, William Winderl, Richard Woodruff and Charles Lawson were busy about the fireplace, plastering and hauling stone. Some of the stones weighing 50 to 75 pounds, and more.

Work on the new home of the Fish and Game club at its range near the old St. Armand race track, near Saranac Lake, has been abandoned temporarily while members of the sportsmen's group are busily engaged hunting deer. Discontinuance of the work is for only a short time, however. As soon as the hunting season is over, volunteer workers of the club will resume construction of the cabin which is to be the nucleus of its new home. It is expected that the cabin will be completed before winter weather handicaps the work. Material has already been hauled to the site.

The desire on the part of sportsmen and guides to get the local fish and game laws organized, designate seasons for hunting and fishing, and prevent the pike and perch from spreading out into our various lakes and ponds and destroying the trout fishing, was the real reason behind the founding of the Saranac Lake Fish and Game Club.

The first meeting was held at the Town Hall on December 8, 1905, and the records show that the Club had a membership of sixty-seven that year. Its first president, and one of its most ardent supporters through the years, was John Hogan. On the list of members were such well known sportsmen as W. C. Leonard, Dr. C. C. Trembley, G. W. Duryee, Al Donaldson (author of "History of the Adirondacks"), M. M. Munn and Howard Demarest. Also Daniel Guggenheim, George Blumenthal, E. Asiel and Abram N. Stein. These latter were New Yorkers who spent the seasons here, and had as much love for the forests and streams as the natives did. Of the sixty-seven listed as members that first year, ten are still alive.

Some of the other members who have held the post of president during the past were Les Smith, Richard R. Woodruff, Dr. Francis B. Trudeau, Joe Goldstein, Ralph Hutchins, Nicholas Davenport, Dr. Edwin M. Jameson, and Lewis Wheat.

Along about 1930, the club purchased the land which is the site of their present clubhouse on Bloomingdale Road. If ever a home was a labor of love, this is it. Men in all walks of life — doctors, lawyers, and white collar workers — all pitched in. They knew little if anything of carpentering, but under the leadership of Lew Wheat, logs were brought from the woods, and with Frank Knapp and Herb Williams to instruct in the proper way of holding a hammer, the building grew apace. Work was done mostly during the daylight saving hours of the evenings, and on Saturday afternoons and Sundays.

Rifle and pistol ranges were laid out. Competition began. During Dr. Trudeau's term as president, he donated a cup for which the members were to shoot. The winner had his name engraved on it, and when he had won it three times, he became the owner. Dr. Trudeau had to stand for a lot of ribbing when he himself won it.

At the present time, they have a 50- and 100-yard rifle range, a 25-yard pistol range and complete skeet and trap range. They sponsor an annual deer hunt, and offer a silver cup for the largest snowshoe rabbit shot within the Adirondack blue line. These affairs are followed by venison suppers at the club house. During the holidays, there are chicken and turkey shoots at the range. Plans are gradually to add to the present building — to include an indoor rifle range, and afford greater facilities for the entertainment of the members.

At present the Fish and Game Club is advocating changing the duck season to conform with the Northern zone, and increasing the propagation of land-locked salmon in certain Adirondack lakes and ponds.

Through the years the membership has grown, until the present enrollment presents the inspiring total of 425 active members.

Meetings are held the first Thursday of each month. Dues are one dollar a year, and all sportmen are invited to join. All that is asked is that they be dedicated to the following principles — taken from the "Constitution of the Saranac Lake Fish and Game Club, Inc." — Article 2 — Objects:

"This club is formed for the conservation of our forests; the propagation, distribution, and protection of game, wild fowl, birds and fish; for aiding in the enforcement of the laws of the state governing same; and to aid in securing proper legislation upon these subjects. It shall be the duty of each member to see that the fish and game are properly protected and that no net, trap, set line, or explosive be used in their taking; and that no perch, pickerel, bass, or any other fish that will antagonize trout shall be put into any waters inhabited by trout."

The present officers are Ed Worthington, Jr., president; Raymond McCasland, vice-president; Mott Chapin, secretary-treasurer. The directors are Les Smith, Howard Sheldon and Earl Smith. As fine a bunch of nimrods as ever missed a rabbit at fifty paces!

Members of the Saranac Lake Fish and Game club completed plans at a recent meeting to hold square dance and card party Saturday evening, Jan. 31, in the main dining room of the Hotel Saranac.

Card games will be held in the lobby beginning at 6:30 p. m. Dancing will be in the ballroom o the music of the Rythm Ranch Boys' orchestra.

Harold Cox is chairman in charge of the evening and will be assisted by Ted Passino, Richard Buchholz and Manuel Benero, Sr.

On recognition of the Saranac Lake Fish and Game Club's 50 years in conservation work, Conservation Commissioner Louis Wehle has agreed to donate the trophy for the annual Adirondack Skeet Championships to be held at the clubhouse on Bloommgdale rd. over the Labor Day weekend.

Police Chief Willam Wallace, chairman, will draw up plans for the award which Mr. Wehle will present personally if possible. Tentative plans include making the trophy a two-leg permanent one, plus having it an international trophy in the future.

The Saranac Lake Fish and Game Club Rifle Team defeat ed the Keene Valley Rod and Gun Club team by a score of 888 - 851 in a 20 shot off hand match held Thursday night at the range in Keene Valley.

Scores from all teams in the Essex County Rifle League will be checked to determine the winner of this match.

On Tuesday night the local team will shoot off a tie with the Westport team to determine the top team in the league. On Thursday night the prone match will be held in Ticonderoga, with all teams in the league competing for team individual trophies. Next week the Iron Sight match, he final event of the season, will be held.