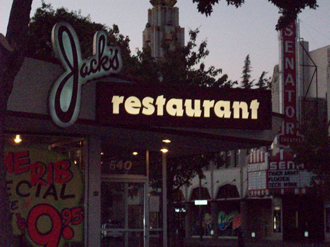 The Jack's sign as it was just turned on at twilight — a sign of the start of Chico's Night Life It can't be helped that Chico has a thriving night life. After all, the student population demands it. For locals, this means being able to square away the munchies late in the night. Many cities simply can't compete! Of course, there are other great perks besides late-night food. See also Five and I and Main Street Strip.

For some, night life is synonymous with going-to-the-bars. Depending on whether or not it is going to be a busy, happening night, night life in Chico may started around 6pm, when a lot of people have just gotten off of work and go directly to the bars. Perhaps the next wave of night-lifers are the ones that had to go home to change first and then go out to the bars... along with any one they bring... and along with a whole other demographic of bar-goers who make it there by whatever time thereafter throughout the night. Usually people are still in the process of getting ready, catching a ride, and going downtown (or to whatever bar it is at which they plan to hang) right up until midnight. Only then does the trend start to go in the opposite direction where people are starting to go home from the bars, or to an after party, etcetera (and you know what I mean by etcetera!). By and large it goes-on in this town right up until the 2'oclock hour on the weekend nights.

For Chicoans who want to participate in our dynamic night life, throwing a party is a prevailing option. This is especially true if you are too young for the bars.

Despite the great numbers of night-lifers, there is a relative dearth of places that are actually open 24/7 in Chico. This is all of them I think!

Restaurants open past 10pm every night

Restaurant Food Past 10pm Some Nights

Places to Study Past 10pm

See Bars for a list of places to socialize with spirits.

Random Things to do Past 10pm