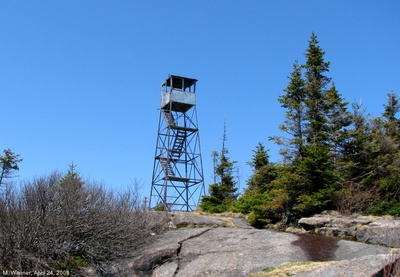 Fire Observation Tower on St. Regis Mountain in the St. Regis Canoe Area. DEC plans to remove the tower, as it is in a wilderness area. The Adirondack Park was created, in large part, to protect the timber of the area from the rapacious logging practices of the 19th century. But forest fires continued to take a toll on the area's forests, especially when the railroads were extended into the park; sparks from the engines caused numerous fires. Huge fires in 1903 and 1908 consumed nearly a million acres.

The first fire observation tower, made of wood and staffed by Fire Observers, was built on Mount Morris in Tupper Lake in 1909; fifty-six more towers were built in the park in succeeding years. Starting in 1916, steel towers began to replace the original wooden towers.

Eventually, it became more efficient to spot forest fires from airplanes, and the Fire Observers were phased out. Thirty-four towers remain standing. While some have been restored, those located within wilderness areas are in danger of being removed by the New York Department of Environmental Conservation.

District Ranger, A. I. Vosburg of Lake Clear Junction, has placed his whole force of fire fighters in operation. The district takes in the Northern Adirondacks and includes the counties of Franklin, Clinton and the northern half of Essex. The force consists of about 150 men and are divided into the following classes: forest rangers, fire wardens, mountain observers, plantation watchers, and railroad patrolmen. The latter of course are maintained by the railroad companies.

The following is a list of the forest rangers, mountain observers, plantation and railroad patrolmen:

The railroad patrolmen will be on duty all of the twenty-four hours until the oil-burning locomotives are placed in commission, which will be as soon as the conditions warrant.

List of Officers on Duty May 1st in Clinton and Franklin Counties.

A roster of the forest fire protective force has been issued by the Conservation Commission which gives these officials tor Clinton and Franklin counties as follows:

District Forest Ranger James H. Hopkins of Saranac Lake presided at a meeting held there Tuesday, April 1, at which the district, forest rangers and fire observers from district one, three and five were present for their annual meeting preliminary to their summer activities.

The rangers and observers present were:

To Supplement Service of Fire Rangers on Mountain Summit

An airplane patrol for detection of forest fires has been announced by Conservation Commissioner Henry Morgenthau, Jr.

The plane will cruise over the Adirondack and Catskill mountain regions during the summer spotting incipient fires that ordinarily might attain considerable headway before being discovered.

The airplane will have a cruising-range of 375 miles, a speed of ninety miles an hour in the air, and a landing speed of 46 miles an hour. It is similar to the plane recently purchased by the state police.

The Albany airport will be the home station for the air patrol.

The state already maintains an elaborate system of fire observation stations on mountains thruout the Adirondacks. Observers at these posts have done most effective work in prompt locating of fires and obtaining quick action to prevent their spread.

Appointment of ten forest fire observers has been announced for the summer season of this year by District Forest Ranger James H. Hopkins, of the Saranac Lake conservation department office.

The list of appointments, as made by the conservation department's Albany office, is the same as last year, with but one exception. Although these appointments are made every year, changes in the personnel are infrequent. Recommendations for the posts are made by each district ranger for his territory, to be approved by the department.

The forest fire observers have been notified to report for duty to this district whenever Mr. Hopkins believes it necessary to have them at their posts for the first fires of the Spring season. The time varies each year, according to the weather. With the present weather of rain and snow it will probably be several weeks before the observers will be notified to report.

All of the ten men are expert woodsmen and well acquainted with their duties. They will continue until about November 1, when they will be given a leave of absence by the department for the winter.

These men must constantly be on duty during the forest fire season, and are in communication with forest rangers in whose territory they are located. In the event of fire they are speedily connected with the forest ranger, whose duty it is to gather men to handle shovels, picks, axes, rakes and other fire fighting tools at the scene of the conflagration. These ten observers are spread throughout the territory of District No. 7, which comprises all of Franklin and Clinton counties and the northern half of Essex county. There are 13 forest rangers in the same territory.

The annual vigil of forest fire observers began Wednesday in this section of the Adirondacks when 10 observers were assigned to their mountain top posts by District Ranger James H. Hopkins of the conservation department.