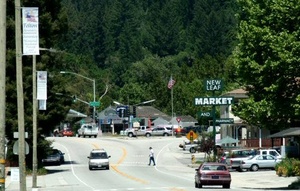 Felton is a small town located in the redwoods along Highway 9 and the San Lorenzo River, about six miles north of Santa Cruz in the Santa Cruz Mountains. In the 2000 census the population was 1,051. There are a lot of fun things to do in Felton, including visits to Roaring Camp Railroads, Henry Cowell Redwoods State Park, the Bigfoot Discovery Museum, and the Felton Farmers' Market.

Felton was first laid out in 1868 by Edward Stanly. It is debated among historians who the town is named after. Some claim it was Charles Norton Felton (1828-1914), a businessman and civic leader from Yuba County, and others offer evidence it was John Brooks Felton (1827-1877), a lawyer and mayor of Oakland. The Felton Post Office was founded on December 14, 1870, and the town of Felton was incorporated on April 14, 1884.1