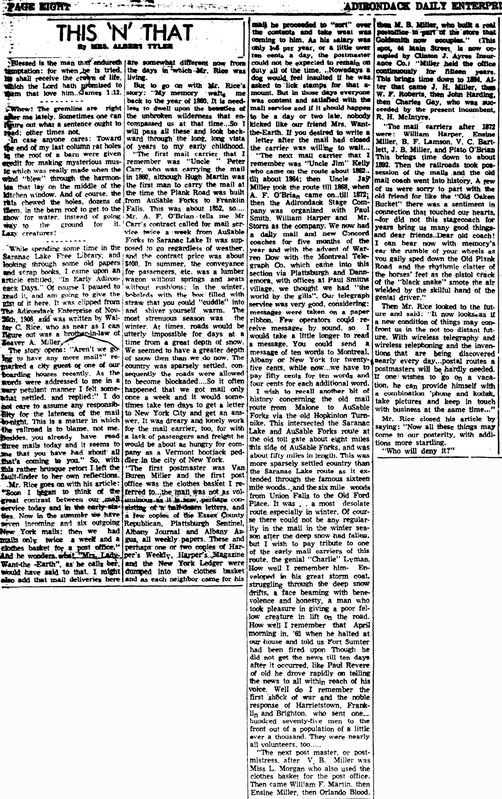 The Village of Saranac Lake and its nearby territory have a complicated history in regard to United States Post Offices. According to the clipping (photo attached), the first Postmaster here was Van Buren Miller, the second Miss L. Morgan. After her came William F. Martin; Ensine Miller; Orlando Blood; and M. B. Miller, who built the first real post office in his 44 Main Street store and held the office for 15 years. This brings the list up to 1884 or 1894 (illegible). Following M. B. Miller were J. H. Miller; W. F. Roberts; John Harding; Charles Gay; and R. H. McIntyre. Until the mention of M. B. Miller's store, it is not clear where in the village the post office was located, but likely it moved from the home or business establishment of one postmaster to that of the next, as most of these were prominent businessmen. The writer also lists the drivers of mail wagons and stagecoaches and laments their passing with the advent of delivery by railroad in 1892.

Several large institutions had their own post offices, such as "Ampersand, New York" at the Ampersand Hotel and "Trudeau, New York" at the Trudeau Sanatorium, with the owner or head of the institution as the nominal postmaster; their employees or patient volunteers actually sorted and distributed the mail. These usually closed when the institution did (seasonally, for some hotels), and eventually mail service was all centalized in the village at a post office called "Saranac Lake, New York." At one time it was housed in a building on Main Street that later became Meyer's Drugs; it is not clear whether the Postal Service owned or rented their space there, and whether or not they occupied the whole building.

In 1925 a new building was built by the postal service at the southwest corner of Broadway and Olive Street, where it is still located. See US Post Office.

Until a few years ago, mail was delivered by boat to the docks of camps on Upper Saranac Lake. Many historic camps had their own leather mailbags. The seasonal St. Regis Post Office near the Upper St. Regis boat launch still handles mail for the campers there, perhaps subsidized by them for their own convenience.

The first post office in Harrietstown was established on Aug. 11, 1849, with Alanson B. Neal named postmaster, and on Jan. 21, 1851, Franklin Falls got its first post office, with John Stearns serving as postmaster. This and other interesting historical data are contained in a large volume titled "A History of St. Lawrence and Franklin Counties, from the earliest period to the present time."