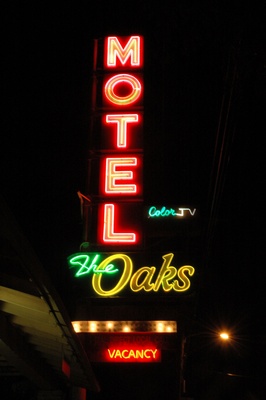 There are lots of places to see and photograph neon lights and signs in Oakland. Many have wiki pages, but some don't. Not all of the neon works. For more interesting Oakland signs, some neon, some not, see the sign postings on Our Oakland.

There was a cool photography show in 2010 called "Oakland Lost and Found" by local photographers of neon signs. Some of the shots are in their flickr group.

Some of the above signs were created by local businesses or are maintained by them. In particular, the signs at the Paramount and the Fox Oakland were created by the Electrical Products Corporation.