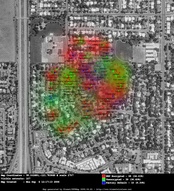 Or you might just be interested in a map of the WiFi networks Local Davis businesses are quite generous in the number of FREE wireless hotspots available to the general public as well as Public Internet Terminals. This will probably continue as long as WiFi users continue to be decent customers — it is important to avoid becoming someone who just hogs up space without buying anything in some reasonable interval. Also be mindful of others who share your connection: massive use of bandwidth (such as peer-to-peer programs) hurt the others that share the connection. Ironically, the larger chains in town require their customers to pay for access, while small business owners in town typically offer it without charge.

Interested in mapping the wifi networks of Davis? Drop me a line. Initial work here.

A Google Maps mashup provides a nice view of WiFi hotspots in different locations, although more data needs to be added for hotspots in Davis - you can help. Also, Fon has a searchable map that lists a dozen or so Fon Hotspots in Davis.

A PushPin Map of mashup provides a view of cell phone dead zone locations and more data needs to be added for poor coverage areas in Davis. 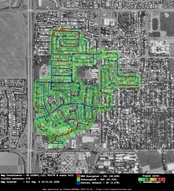 Expanded map of the WiFi networks on Sycamore

Most public wireless networks do not use encryption. This means that if the websites you're accessing don't use encryption (i.e. their addresses don't start with https), anyone else with a computer close by can see everything you send and receive. Some websites such as facebook and all wikispot wikis use encryption for just login information so that while somebody could read everything you're doing online, they can't get your user name and password. MySpace does not use any encryption so you might want to hold off reading your messages and such until you get to a place with wired internet or encrypted wireless (such as at home). Most bank websites use encryption. Just check for the https. Gmail uses encryption for your entire email session. However, the person receiving email from you might be not be using Gmail.

One exception is Instaconnect they put everyone behind a massive public IP thereby hiding your IP address. They make everyone create an account which means that to access your account or information you have to be on your computer with your MAC address, and have to know your log-in and password. The down side is having to create an account when all you really want to do is get online, but you only have to do it once and most places downtown can see Instaconnect hotspots.

Before doing any credit (or debit) card transaction online, you should always make sure the connection is encrypted. You can see that it is if the address starts with "https" (rather than just "http", which is not encrypted). This is regardless of whether you are using a public Wi-Fi network or your own at home. And you should never use a public computer for this - it may have a "key logger" on it, which tracks everything you type, including passwords, credit card numbers, etc. 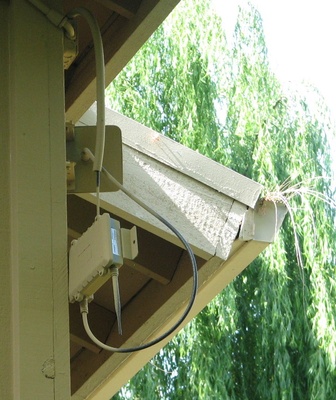 Not all wireless access points are maintained equally well

Available to UC Davis affiliates only. If you have your laptop with you on campus and wireless access won't work, plugging into the campus ethernet might be a good idea.See MOObilenet for information on the wireless network on campus, including how to set up your laptop for access.

Other Hotspots on Campus

Hotspots Outside Davis (but on the Wiki)

2007-03-02 15:05:42   I'd like to help map the wifi networks. As of this moment (2007-03-02 3:04pm) the above link doesn't work. I haven't removed it because it may just be a temporary thing. I was wondering how we could go about combining wireless info. I noticed the current maps were made using Kismet. Last time I checked I couldn't use my serial port in Linux on my laptop (for my GPS). I'm sure there's a way we could combine it with a NetStumbler file though. I'll also try a newer version of linux and see if I can get my serial port working. —BradBenedict

There are a couple of good USB/serial converters that are known to work with Linux. Here's one example. —ArlenAbraham

HP OEM cables can be found all over the place, and they are quite compatible. I use one for my Palm IIIc. —JabberWokky

2007-03-07 15:17:02   Yeah, I actually have a serial to USB converter, but I have yet to try it. I think I got the GPS working, but I somehow broke the madwifi drivers now. Anyway, I was thinking kismet/gpsmap make better maps than pretty much anything that I've seen map NetStumbler, but not as many people would be able to join in on the wardriving cause they don't know how to run *nix or have incompatible hardware or whatever. —BradBenedict

I can make google-earth density maps if given the data... GeoQO can read wigle data, and other data types, and produce google earth density plots like is seen on the Geocaching page. —WesHardaker

I wish I saw this a couple years ago when I drove all of Mace Ranch just for the hell of it. I collected it with NetStumbler, and then mapped it with MapPoint. I wouldn't mind helping out. —DavidGrundler

Still have the stumbler files? If so, send 'em to me! —WesHardaker

If I do, they are on an old laptop. I'll look tonight. —DavidGrundler

If I'm not mistaken, the wireless access points on campus require a UC Davis computer account, so I wouldn't call them generally "accessible". Furthermore, that information is already linked from the MOObilenet page that describes in more detail how it is different from more public or open networks. —NickSchmalenberger

2008-04-28 08:49:10   I made the original maps posted here. I would suggest a combination of Kismet, Python, and GRASS for map making. They are all open source apps that run on just about any non-broken (i.e. Windows) platform. If anyone is still interested I can post the updated scripts for de-constructing the Kismet log files for use in your favorite mapping application. some more details, and some more here. —DylanBeaudette

2008-07-11 08:40:19   I have lived at an apartment complex that had Instaconnect through Aria Communications (Solysis). Is the City still working with them for downtown wireless? If so, don't get your hopes up. They were always down and it was always someone elses fault. Customer service was horrendous (when they actually answered). —MirandaLerick