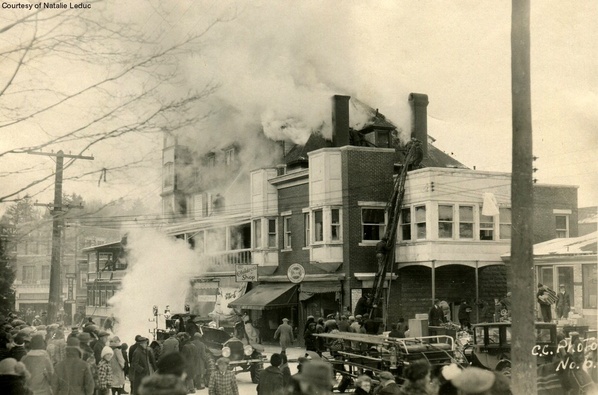 The Berkeley House survived this fire on January 1, 1925, though it lost its top floor in the renovation that followed. The building was destroyed by the fire of January 10, 1981. Fire has played a major role in the history of the Saranac Lake area.  Many houses, and most of the area's hotels have burned, some more than once, and forest fires have transformed the landscape.

"Fire Escapes to be Required for Sanatoria Here State Public Health Law Compliance Demanded by Veterans Bureau Health Board Acts Survey Started to Make Enforcement Uniform on 3-Story Houses Cottage sanatoria in Saranac Lake of 3 or more stories height will be required to construct iron stairway fire escapes under concurrent action being taken by local health authorities, county officers and the U.S. Veterans Bureau." [Cancellation of contracts following failure to comply . . .] "In order to make enforcement uniform throughout the village, the board of health is to make a survey of all nursing cottages, boarding houses and other buildings housing tuberculosis patients." . . .

-- The hotel, store and contents of James W. Daily, at Saranac Lake, were destroyed by fire on Sunday morning. The progress of the flames was so rapid that the family of Mr. Daily had only time to escape with their lives. One of the oldest daughters threw her little sister from an upper window into a snow-bank below, and in her night clothes only, leaped down after her, both uninjured.

Listed here are some of the properties damaged or destroyed by fire over the years.