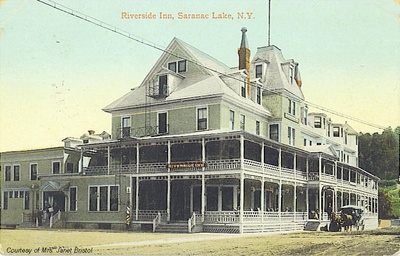 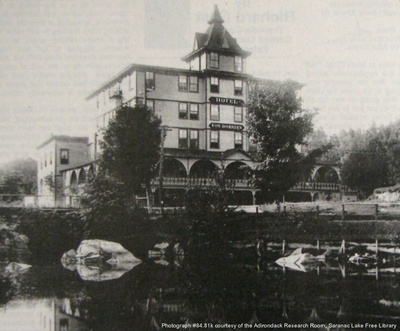 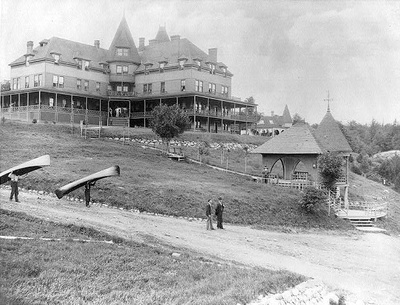 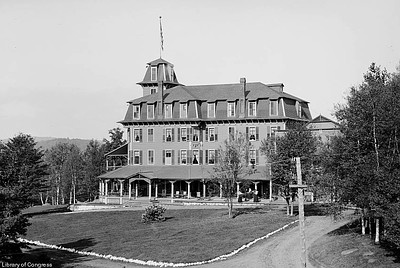 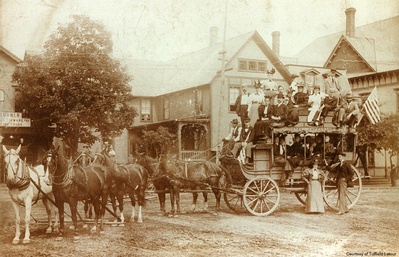 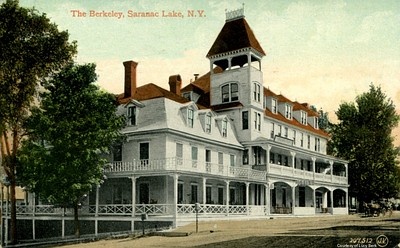 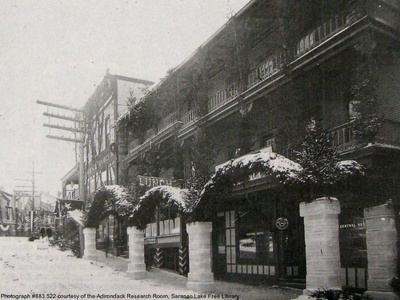 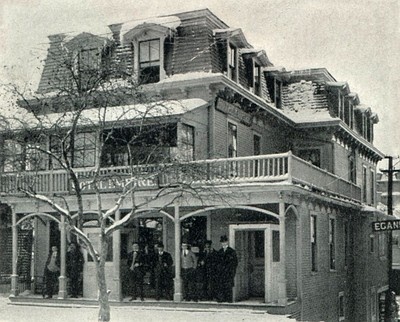 Empire Hotel, c. 1909; a sign for Mike Egan's livery can be seen in the alley, at right. (From Saranac Lake in the Adirondacks: The North Woods City of Health and Opportunity, Mid Winter Carnival, 1909. Courtesy of the Adirondack Research Room, Saranac Lake Free Library) 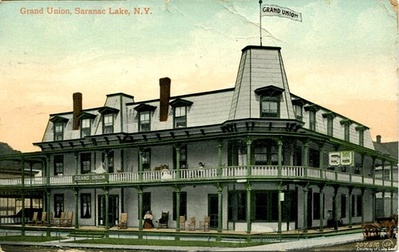 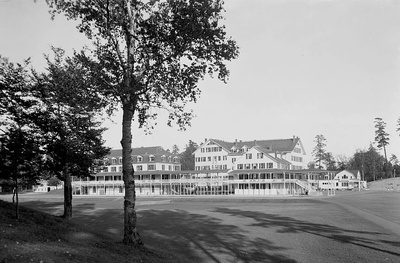 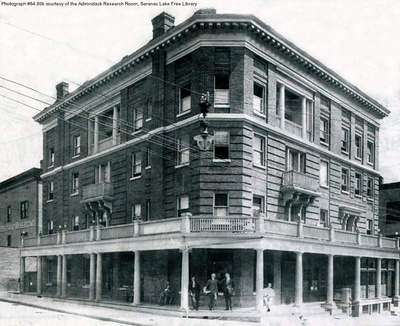 Hotel St. Regis, on the corner of Bloomingdale Avenue (left) and Broadway (right), early 1900s. Henry P. Leis Pianos is visible at left. Of all the hotels listed below, only the Hotel Saranac survives. All the rest were lost to fire or demolition, or closed and converted to private use. 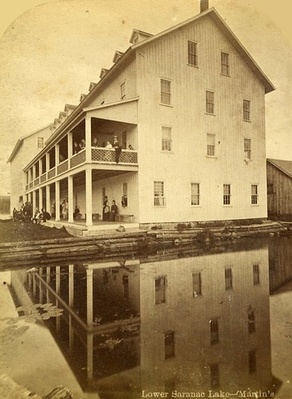 SARANAC LAKE — During the first ten years of 1900, the Saranac Lake vicinity could boast a total of no less than 15 hotels. Eleven of them were within the village while the other four were not far outside the corporation line.

Beginning along Main Street, there was the well-known Riverside Inn. Next door to the old Town Hall was the American House, which become the Empire in 1908. Across the river from the Empire was the Villa Dorsey, connected to Main St. by the long forgotten footbridge. At the corner of Main and Broadway stood the venerable Berkeley, the last of this group to survive as a hotel. Where Altman's store is now located was the Central House, while at the intersection of Broadway and Bloomingdale Avenue, on opposite corners, were the St. Regis and the Arlington. At the present site, of Stewart's, bordering Bloomingdale Avenue and Depot Street, was the Franklin House, which later became the Grand Union Hotel. Moving up Broadway, on the right hand side, the Adirondack Hotel was near the present location of the fire station. The existing dwelling at No. 111 Broadway was once the Broadway Hotel. On Ampersand Avenue, at the corner of Mills Avenue was the Saranac Hotel.

On Lower Saranac Lake, just outside the village, stood the once famous Martin's (later Miller's), the Algonquin, and the Ampersand, all three well steeped in local history. Finally, where Forest Home Road branches off Ampersand Ave., there was the Del Monte which also survived a name change to the Van Dorien.

In addition to the abundance of Hotels, there was a plethora of Boarding houses, many of which were eventually converted to cure cottages. In the case of the Villa Dorsey it might be debated whether the place should be termed a boarding house or a hotel. However, at peak capacity, the establishment could accommodate 30 guests which should qualify it as a "small hotel."

The Villa Dorsey was built by Walter Channing Rice in 1889, and among the early guests were a pair of sisters named Dorsey who were Quakers from Germantown, Pa. A resulting friendship led to Channing naming the hotel in the sisters' honor. Directly from the building the name was transplanted to the street. Thus, the Villa Dorsey became No. 1 Dorsey Street. Rice ran the place until 1909 and during the 10 years many famous people slept under his roof. The most noted couple to occupy his rooms were President and Mrs. Grover Cleveland. First renting his house to Mrs. Florence Merry, Rice finally sold out to her in 1923.

Walter and his wife, the former Laura Miller, had five sons — Herman, Seaver, Irving, Sturgis, and Livingston, all of whom served in World War I. In 1915, during the term of the lease. Rice took a job no watcher in the fire tower on Ampersand Mountain. Apparently he enjoyed this position, even though it was lonely at times, and stayed on the mountain for eight years. As fire warden he was a constant delight to all those who climbed Ampersand. He invited them into the tower and while they enjoyed the view, he regaled them with stories. Just one year after leaving his beloved mountain, in 1924, he died.

Of the five boys only Herman "Bugs" Rice elected to remain in Saranac Lake, where he was well known as the friendly mailman who dispensed dog biscuits to the family pets along his route. In 1930 the sons commissioned a bronze tablet which was installed on Ampersand's summit. The inscription on the plaque read as follows: In Loving Memory of Walter Channing Rice 1853-1924, "The Hermit of Ampersand," who kept vigil from this peak 1915-1923. Erected by his sons 1930/ Died in 1924.

By crossing over the old foot-bridge from the Villa Dorsey to Main Street, one would pass between the Town Hall and the Hotel Empire. The Empire was similar in size and shape to the Villa and both were three-story structures. The main attraction of the Empire was its genial host John Crowley, better known as "Jack." In the days before prohibition, the bartender was often the drawing card to an establishment and the taproom a common male meeting place.

Jack Crowley began his career tending bar at the Berkeley and his popularity won him a sizeable following. Deciding to move out on his own, he soon became the proprietor at the Empire and the little hotel immediately enjoyed an upturn in its patronage. Apparently, Crowley brought along his many fans from the Berkeley. It was a common practice in those days for the proprietor of the hotel to serve as barkeep, at least part time, to maintain a fraternal rapport with his clientele.

Crowley was a past master in this category. One of his innovations was the introduction of an annual beefsteak dinner. The success of this event is evident in the accompanying photo which depicts a group of well-known local residents of 1912. Among those in attendance who might be recognized in addition to Crowley were: George Downing, Ben Durgan, George Smith, Elmer Finnegan, Archie Nimmo, Truman Hanmer, Sam Newcomb, Jerry and Mack Pasho, Wilbur Mussen, Del Oldfield, Jim Curran, Jim Ryan, Earl Finnegan, Ed Lamy and his father Fred Lamy.

Charlie Green's favorite story about Jack Crowley told about a rare occasion when the master of wit got stung. Jock was tending bar when Del Oldfiuld came in wearing a pained expression of feigned disbelief. Approaching the bar, Del said,

"Someone just told me that you were mean enough to take a man's last cent for a drink of whiskey. Is that true?"

"You're d—n right I would" replied Crowley.

"Okay then," said Del, "Hero's my last penny so give me a drink!" To the amusement of all those present, Jack poured the drink without the slightest protest.

In addition to Crowley's popularity, the Empire could boast of still another drawing card. In charge of the livery stable, which was attached to the rear of the hotel, was Mike Egan. Mike arrived from Ireland where he was reportedly the world's champion handball player. Even though he was a consumptive, he was renowned for his legendary feats of strength. It was told that he once went to the aid of a stranded motorist who had skidded off the aide of the road. Mike picked up the rear of the car, placing the back wheels on solid ground, without bothering to notice that two passengers were still occupying the rear seat! Later in life Egan became a well-known building contractor, erecting several houses in the Leona and William Street area.

As reported in an earlier article, the Empire played an important role in our local history. On the night of July 26, 1926, a late-hour poker game was in session at the Empire when a fire broke out next door in the Town Hall. The card players, upon hearing the screams of men locked in the jail, managed a rescue before the fire consumed the building.

One might wonder how the infant village could support so many hotels in the early 1900s while only the Hotel Saranac serves the purpose today. A combination of changes obviously answers the question. When the health industry was a major attraction to our area, there were not only the hundreds of tubercular patients arriving but also the visiting family members who needed temporary housing. The International Speed Skating Races in Ed Lamy's day attracted spectators that out-numbered the local residents. To top it all off there came the automobile and the resulting surge of motels.

In any event, out of the 15 hotels listed in the 1900-1910 group only one building survives, and that no longer a hotel for many years past. Of the 14, not all enjoyed the colorful existence of the Empire, and though some are well remembered others might not even be vaguely recalled. Of course, the Alpine is easily remembered but it did not fit in the early 1900 category. Six of the original list — Martin's, Ampersand, Central House, Grand Union, St. Regis and Berkeley went down in flames. The remaining eight — Empire, Algonquin, Riverside Inn, Van Dorien, Adirondack, Saranac, Villa Dorsey and Arlington — were all razed after outliving their usefulness.

With the passing of the Empire, Crowley became bartender at the St. Regis. He still had his loyal following and was a sort of folk hero to his remaining clientele. One of his faithful fans composed a humorous little ditty which, although never reaching the top ten on the hit list, was nevertheless sung with gusto in the best barbershop harmony when the good ol' boys gathered at the bar. Its memorable lines were at follows:

"On Monday we had bread and gravy On Wednesday and Thursday 'twas gravy on toast But that's only gravy on bread So on Friday we said to Jack Crowley Why can't we have something, instead? So on Saturday morn At the first break of dawn We had gravy without any bread."

The hotel, store and contents of James W. Daily, at Saranac Lake, were destroyed by fire on Sunday morning. The progress of the flames was so rapid that the family of Mr. Daily had only time to escape with their lives. One of the oldest daughters threw her little sister from an upper window into a snow-bank below, and in her night clothes only, leaped down after her, both uninjured.