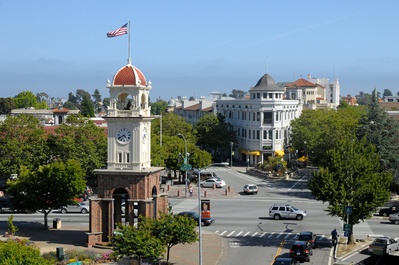 Pacific Avenue and the surrounding streets are still often referred to by the name Pacific Garden Mall or simply The Mall, but since the Loma Prieta Earthquake and the subsequent redevelopment of the area, people mostly use the term Downtown.

The Downtown area includes many businesses, restaurants, city government offices and facilities, and residences. The area also features displays of a variety of public artwork, including murals, and street performers can often be seen and heard entertaining a crowd. 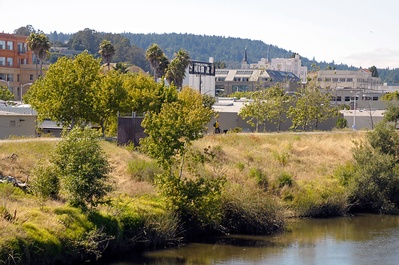 The east side of the downtown and the San Lorenzo River as seen from Laurel Street Bridge. 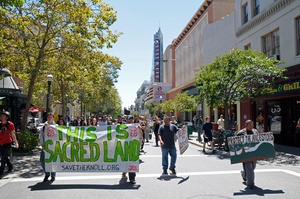 While the downtown district is comprised primarily of businesses, the top levels of many of the buildings are apartments and residences, and a delicate balance exists between public use of the area and domestic uses. The noise ordinance is one result of this balance. The downtown features a variety of regular events, such as the Santa Cruz Farmers' Market. When visiting the downtown, common sites include street performers, public art, protests, oddly decorated cars driving down Pacific Avenue, the homeless, street crime, tourists, locals, and just about any other urban human activity one can imagine.

The City of Santa Cruz has quite a few city ordinances specific to the downtown area: 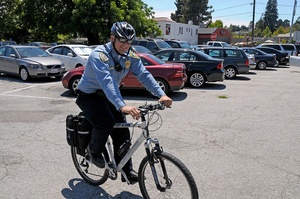 A guide from the Hospitality Guide Program (wearing yellow and blue) on Birch Lane.

See Pacific Avenue for businesses located on that street

The Santa Cruz Beach-Downtown Trolley operates April 15 to Oct. 15 and costs $.25 for a ride from the beach to the downtown (or the other way). 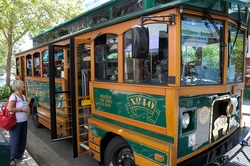 Skateboards and other roller-devices are prohibited downtown, especially on the sidewalks. Walking is encouraged, and jaywalking is the norm, which drives drivers insane. Cycling is fine, as long as you dont do it on the sidewalks. Also note that people have been given tickets for riding down Pacific Avenue in the wrong direction of a one-way street.

Most parking meters cost $.25 for a half hour, but there are some that charge different rates. Many meters now allow parking for up to 12 hours at a time.