The Adirondack guide was crucial to the development of the Adirondacks as a popular tourist destination. From the mid-1800s, growing numbers of sportsmen were interested in experiencing the wilderness and the hunting and fishing opportunities provided by the Adirondacks. But a city-bred sportsman needed an experienced woodsman to get him out into the wilderness in comfort and safety.

Guides in front of the Harrietstown Town Hall 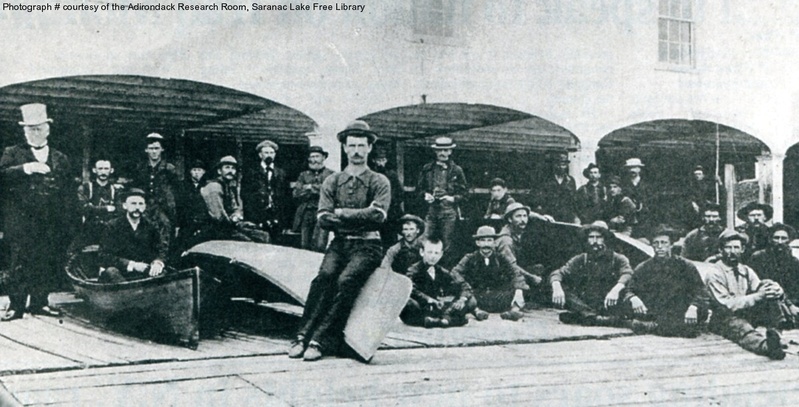 Guides at the boathouse of Paul Smith's Hotel, October 2, 1885. Photographed by A. W. Durkee, in A. L. Donaldson's A History of the Adirondacks 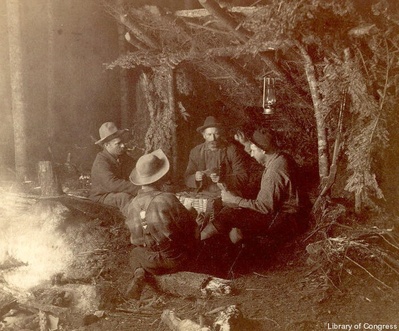 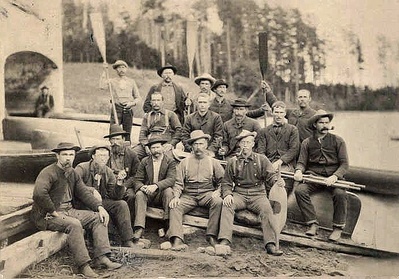 Guides of Paul Smiths hotel, known as the St. Regis House at the time,  guide house  at left. This picture was taken from the area of the current canoe launch, looking east towards the student center. The hill at left was the site of the original 17 room hotel on (out of view). The main floor of the hotel was approximately 15 feet above the surface of the lake at that time. Improvements to the Keeses Mill dam increased the water level by several feet by the turn of the 19th century and the rest of the hill was physically removed by the hotel company. Undated, possibly as early as 1870 or as late as 1885.
Courtesy of Paul Smith’s Archive, Paul Smiths College

GUIDES. If the names of any guides are omitted in the table appended, it should be attributed to unintentional oversight. Guides charge for services from $2.50 to $3 per day. They furnish a boat, an ax, perhaps hatchet and auger, and carry all the luggage over the portages — though gentlemen will naturally assist them somewhat in this laborious operation. Guides, too, do all the cooking and attend to all the domestic duties incident to camp life. It is customary for two individuals to employ one guide between them—thus reducing the cost one half.

Boats may be hired independent of guides at 50 cents per day. The expense of living, while in the woods, need not exceed $2 for each person per week; and even this figure may be considerably reduced. The proximate cost of a journey to the Adirondacks, and a sojourn for any period therein, may be easily estimated from the above data.

Pledge of Saranac Hotel-Keepers and Guides.

We, the undersigned, hotel proprietors, guides and residents of the Adirondacks, having learned with regret that some vandal has been committing depredations upon the State hatchery property at Little Clear pond, do most heartily condemn such a dastardly outrage, and do pledge ourselves to use every lawful means to bring such perpetrators to speedy and condign punishment.

The annual convention of the Adirondack Guides' Association was held at Saranac Lake recently, and was the largest in the life of the organization, about 200 delegates being in attendance. State Treasurer A. B. COLVIN was elected president, THOMAS REDWOOD, of Keese's Mill, vice-president, and JOHN H. MILLER, of Saranac Lake, secretary.

… Fishing and motor-boating are as ever the chief sources of lake amusement. The catches have been surprisingly large, taking into account the frequency with which the waters are fished. And when the catches are inconsequential the guides are an entertainment in themselves. Combine the cumbersome dialect of the Pennsylvania Mennonites with the uneven speech of the Down-East Yankee, the blending of a drawl with the guttural expression, and the two, irregular enough when apart, are a near approach to the speech of the Adirondack guides. It is at once a language to demoralize the purest and confound all efforts at understanding. It is as queer as anything one ever heard—withal as queer as the guides themselves. For, be it known. Lower Saranac guides have been formed in their own individual mold. They are loquacious, self-confident, opinionated, gossips of the most pronounced type, and each is Jealous of the other. Everybody's business is their business, and they absorb more trivial and inane chatter than do the correspondents of the yellow journals in such populous divorce centres as Sioux City and Aiken. Families who remain safely in their homes for nine months in the year, undisturbed by insidious busy bodies, can be made the subject of more manufactured comment in the three months of the Saranac Summer season than they can dispel in the three months that are introductory to the holiday season. The North Woods pilots are not entirely devoid of humor of the rustic sort, but it is not spontaneous and bears no relationship whatever to wit. They are unlike the hunters and trappers of other isolated sections of the United States, contain no savor of the untamed portions of the West, no smack or tang of the remote Canadian north. They have adhered to the original modeling of their kind, and, in the variety of their devious mental processes, they range further from their own habitations than the average man is prone to go. At Lachine trappers and guides will regale the uninitiated with impossible stories of game, relating monstrous exploits in the capture of forest denizens, or, mayhap, will relate some anecdotes of the woodspeople themselves. Lower Saranac guides deal wholly in personalities, and what they do not know about the visitor they manufacture.

Local guides are now wearing the insignia of the new guides register. All guides are required to register now to provide better cooperation with the conservation department in the protection of game and fish. Application forms list the guides' qualifications on cooking, swimming, boat management, ability to make and carry packs, past experience and territory with which he is familiar. Certificates of character, ability and experience are also required.

Hereafter when the vacationist visits the Adirondacks or any other place within the forest preserve of New York State he will not only be able to get circulars published by the conservation commission describing the various sections, but at the same time may secure a list of guides registered by the conservation commission. By registering guides the state proposes to make available a class of competent men to show the recreationist around, but at the same time to protect him, protect the forests against fires and protect the wild game.

The following men are registered guides of Franklin county: