There is no Oakland history without a history of the black community of Oakland.

Indeed, there is no California without black history. The very name "California" comes from an early Spanish novel:

"Know, that on the right hand of the Indies there is an island called California very close to the side of the Terrestrial Paradise; and it is peopled by black women, without any man among them, for they live in the manner of Amazons." 1

Some of the members of the 1776 Juan Bautista de Anza expedition were Afro-Latinos from Mexico, seeking a better life in "Alta California."

As elsewhere in the U.S., the contributions of blacks to early history were largely ignored. Much of what we know about blacks in early California and Oakland history comes from Delilah Beasley's seminal work, Negro Trailblazers of California, published in 1919.

Some early black residents of Oakland include the Wysinger family, Elizabeth, Isaac, and Lydia Flood, Jennie Prentiss, and William Shorey.

Schools in Brooklyn (east of Lake Merritt) were desegregated in 1872 by the efforts of the Floods, and Oakland schools soon followed. (There was and is still de facto segregation.)

An early black newspaper was the Oakland Sunshine, published 1897-1923, founded and edited by John A. Wilds. 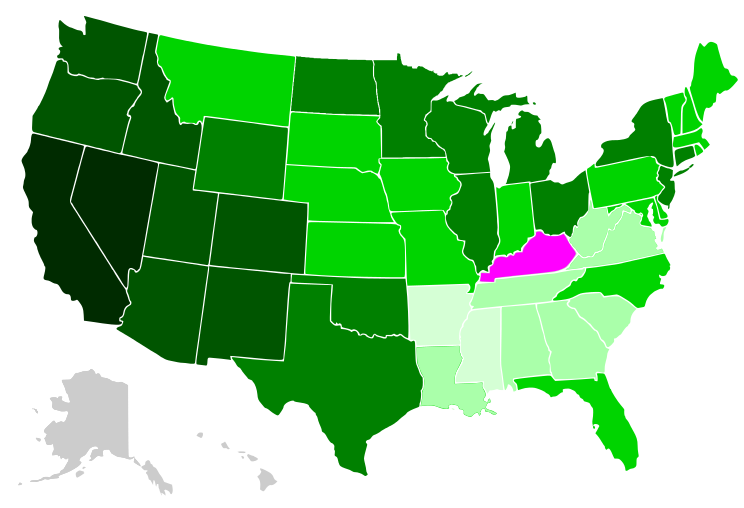 A map showing the black population % change by U.S. state between 1900 and 1990. [Source: WikipediaWWII had a major effect on the city and its black population. The defense industry was a key economic driver during WWII. By the end of the war, the Federal Government was the largest public employer in the Bay Area [Johnson, The Second Gold Rush]. Through the activities of the NAACP, Brotherhood of Sleeping Car Porters, and others, black workers were able to fight defense industry discrimination in employment and gain access to well-paying jobs. Demobilization after WWII devastated Oakland's economy. As opposed to other cities like Los Angeles, where the defense industry laid the groundwork for peacetime high tech industry (often still linked to the Defense Department), few of Oakland's wartime industries (especially shipbuilding) were applicable after the war [Murch, Living for the City, 17].

[Add info about blacks being elected to office in Oakland]